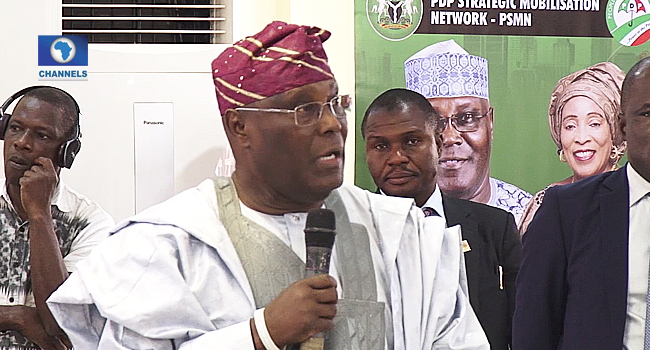 The presidential candidate of the People’s Democratic Party (PDP), Atiku Abubakar, has promised that if he is elected President, he would undertake reforms that would boost the nation’s economy and infrastructure.

Specifically, he said he would accelerate investment and double infrastructure, a situation he believes would also attract more foreign direct investment.

The PDP candidate said this on Wednesday while delivering a lecture at the Lagos Island Club titled My Vision To Get Nigeria Working Again.

He said, “Our philosophy is that people are fundamental reasons for economic growth.

“Accordingly, we will increase investments in the human development sub-sectors especially education and health by committing 25 % of the budget to education and 15% to health under a collaborative process within the G3 partnership and of course, also the participation of the private sector.

“Our vision is to accelerate investment, to double our infrastructure stock to approximately 50% of GDP by 2025 and 70% by 2030.

“We will improve liquidity by undertaking fiscal restructuring and improving the management of our resources by improving the spending efficiency and reducing the share of recurrent expenditure and increasing the share of capital expenditure in the budget which we were able to reasonably achieve during the Obasanjo administration but soon after that, there was a decline”.