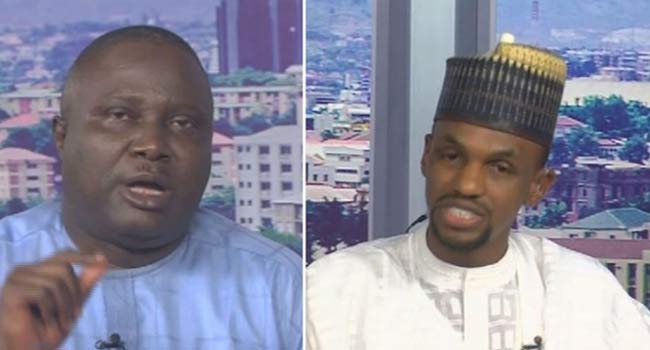 The Peoples Democratic Party (PDP) and the All Progressives Congress (APC) have traded blame over the suspension of the Chief Justice of Nigeria (CJN), Justice Walter Onnoghen by President Muhammadu Buhari.

While the PDP has faulted the action, the APC sees the development as a right step in the right direction in the war against corruption.

The Special Adviser to Atiku Abubakar on Youth and Strategy, Ahmed Adamu and the South West Coordinator and Youth Directorate of the APC, Wole Badmus, both bared their minds during an interview on Channels Television’s Sunrise Daily.

With the presidential election about 20 days away, PDP’s Adamu said the party sees the removal of the CJN as an attack on the rule of law.

“We are very concerned not because we have any personal interest, we don’t have any connection with the removed or suspended CJN. Our concern is the attack on the rule of law, an attack on the judiciary.

“The judiciary is the sacred pillar of our democracy and these are the tools that we hold dearly, we hold close to our heart. And whenever the rule of law or the judiciary is attacked, we have to be very much concerned and involved.

“And that is why we are not relenting to fight against tyranny, to fight against injustice. And the time when we are about to go into the general elections and when we rely so much on the rule of law, what we are seeing today is not something that will guarantee us a free and fair election in the country,” Adamu stated.

But reacting, APC’s Badmus stated that President Buhari should be commended for sparing no sacred cow in the war against corruption.

He, however, faulted CJN Onnoghen for allegedly forgetting to declare his assets which is a major requirement for holders of public offices.

“I think the starting point is to look at the initiator of the whole crisis we are presently facing in the judiciary.

“If you look at it holistically, you will find out that if the CJN had not initiated this whole crisis by trying to use his privileged position, having confessed to having made fundamental errors which border on forgetfulness and non-declaration of assets as required by the constitution for public officers.

“And in the process, trying to run away from his shadow by trying to avoid the duly prescribed means of dealing with such abnormalities which is the Code of Conduct Bureau (CCB) to Code of Conduct Tribunal (CCT),” Badmus stated.

The comments made by members of both parties follow the suspension of Justice Onnoghen over an alleged non-declaration of assets by the CCT.

Following the suspension, Justice Ibrahim Tanko Mohammed has been appointed as the acting CJN.

According to the President, the development is based on the request of the Code of Conduct Tribunal, pending the completion of Onnoghen’s trial.

PDP Congratulates Buhari At 76, Tasks Him On Rule Of Law