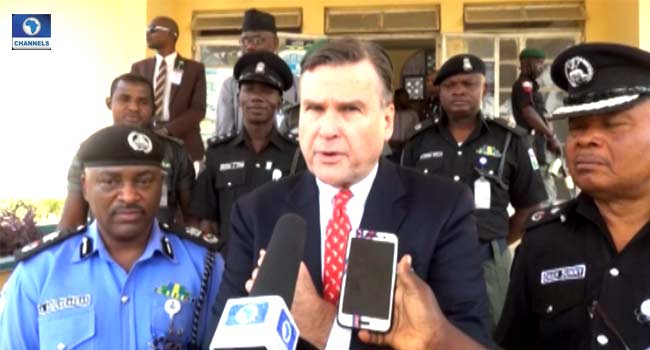 The United States Ambassador to Nigeria, Mr Stuart Symington, says he has received assurance from all leading presidential candidates that every vote will count in the forthcoming general elections.

Symington stated this on Wednesday in Kaduna State after meeting with the Commissioner of Police in the state, Ahmad Abdulrahaman.

“I have talked to your President, I have talked to the leading candidates and they have all reassured me personally of their commitment to every vote counting, to people being able to cast their vote and for those votes to be counted lawfully,” he said.

READ ALSO: Atiku Accuses Buhari Of Constitutional Breaches In Letter To US, UK, Others

The US envoy believes that Nigeria plays a crucial role in consolidating democratic norms in Africa as the world watches with keen interest.

“These elections are really about only about Nigerians. They will be decided by Nigerians and the Nigerian law and they will define the future of Nigeria. But they are also important for others.

“They are important for everybody who has looked up to Nigeria’s example of democracy in the past and who may, if these elections are as good as the elections of 2015,  that credit can be invested in democracy and freedom throughout Africa, throughout the Western Africa and throughout the rest of the world.