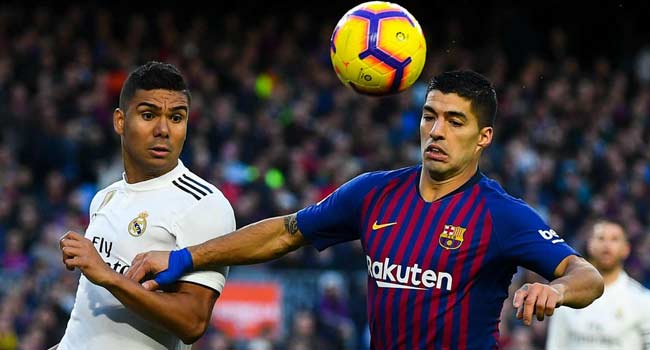 Real Madrid will face defending champions Barcelona in the semi-finals of the Copa del Rey.

The draw made on Friday means there will be back-to-back Clasicos, with the second leg due to take place in the last week of February, before Madrid host Barca in La Liga on March 2.

The first leg will be played at the Camp Nou next week before a return at the Santiago Bernabeu. The provisional dates are February 6 and 27. Real Betis will go up against Valencia in the other semi-final.

Barcelona are 10 points clear of Madrid in La Liga and will be favourites to progress but their opponents have found form in recent weeks, winning six of their last seven matches.

Barcelona director Guillermo Amor said: “Real Madrid are playing well and they will be the Madrid team we always expect — a group of winners that competes for everything, that can give us a scare if we are not ready to work.”

“There’s nothing like it,” Real Madrid director Emilio Butragueno said. “We are talking about two teams with a lot of resources, with extraordinary players and we always expect very tight games.

“We trust our players but obviously this is one of the greatest games in the world today.”

Barca are chasing a record fifth Copa del Rey success in a row while Madrid are into the last four for the first time since they won the competition in 2014.

Two Clasicos in a week

Two Clasico games in a week will crank up the pressure on both teams at the end of the month but Real also have a testing schedule around the first leg, sandwiched between a city derby against Atletico Madrid in La Liga and a Champions League last-16 first leg away to Ajax.

Santiago Solari’s side will hope victories in the Copa del Rey can have a knock-on effect in the league, however, where Barca have been unflappable over the past two months, winning eight matches on the spin.

The opener at the Camp Nou will present Madrid with a chance to avenge their 5-1 hammering there in October too, a result that led to Julen Lopetegui being sacked as coach.

They reached the Copa del Rey semis after completing a 7-3 aggregate victory over Girona on Thursday while Barcelona pulled off a brilliant comeback to beat Sevilla, overturning a 2-0 first-leg deficit by winning 6-1 at the Camp Nou.

Valencia continued their own resurgence by scoring two late goals to overcome Getafe on Tuesday and Real Betis needed extra time to knock out Espanyol.

Each sitting on 29 points in La Liga, Valencia and Betis played out a goalless draw when they met at Mestalla in September and both will fancy their chances of making the final.

Betis also have added motivation in this year’s competition after their own stadium, the Benito Villamarin, was confirmed as the venue for the final on May 25.

“For everyone, and above all the fans, it would be an extraordinary way to finish the season,” Betis coach Quique Setien said earlier this week.

“To play the final in your home stadium, on your home pitch, and with your fans in your own stands — we know half the city would be there to support.”