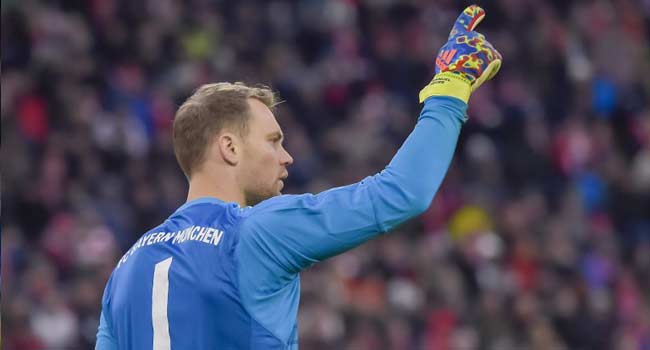 A thumb injury has ruled Bayern Munich captain and goalkeeper Manuel Neuer out of Saturday’s Bundesliga match at Bayer Leverkusen with the defending champions chasing an eighth straight league win.

“The captain of Germany’s record champions suffered an injury to his right hand in training and therefore stayed in Munich on Friday afternoon,” said the club’s website.

Bayern have not said for how long Neuer, Germany’s goalkeeper, will be sidelined with their Champions League, last 16, first-leg clash against Liverpool at Anfield on February 19 rapidly approaching.

Neuer, 32, missed Friday’s final training session, but according to Germany’s top daily Bild, there is no fracture.

Bayern coach Niko Kovac is said to have seen the X-Ray on the team bus, which dampened spirits on the way to Leverkusen lagging six points behind leaders Borussia Dortmund in the table.

With Neuer ruled out, back-up goalkeeper Sven Ulreich will take over at Leverkusen having yet to play a single game this season.

However, the 30-year-old proved himself a capable stand-in last season, after Neuer fractured his foot in September 2017, as Ulreich ended up playing in 29 of Bayern’s 34 league games and kept 12 clean sheets for the reigning German champions.