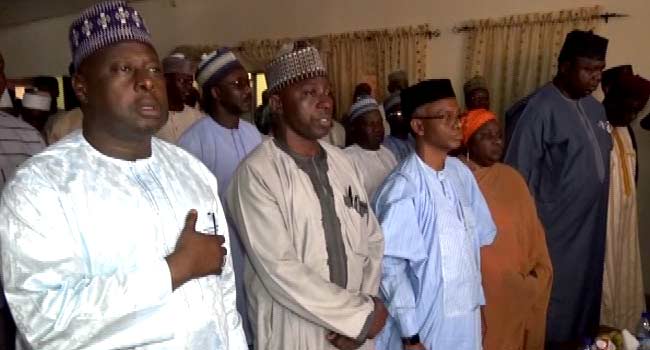 Candidates of various political parties in Kaduna State have signed a peace accord ahead of the coming general elections.

The aspirants converged on the Kaduna State Police Command headquarters on Tuesday to sign an agreement to conduct themselves peacefully before, during and after the polls.

The state governor, Nasir El-Rufai, who is seeking re-election on the platform of the All Progressives Congress (APC) and Isah Ashiru of the Peoples Democratic Party (PDP) were among the 26 of the 39 governorship candidates who attended the signing ceremony.

Before signing the accord, representatives of some political parties raised concerns on the sincerity and commitment of some candidates to abide by the agreement.

In his address, the Commissioner of Police in Kaduna, Mr Ahmad Abdulrahman, stressed the need for all the candidates and their supporters to conduct themselves in a peaceful and orderly manner.

According to him, this will ensure a peaceful atmosphere that will lead to a credible and acceptable electoral process.

Mr Abdulrahman said beyond the symbolic peace accord, the candidates must equally realise the need to be more democratic in the conduct of political activities within the ambit of the law.

He urged them to embrace peace, as well as ensure understanding and respect for one another before, during and after the elections.

The Police commissioner stated the commitment of the command to ensuring an electoral environment free of intimidation.

He, however, warned politicians to play the game by the rules and be conscious that there would always be winners and losers in every contest.

Speaking to reporters after the event, some candidates and political party leaders promised to abide by the peace agreement.

They also asked the Independent National Electoral Commission to conduct a free and fair election.

PHOTOS: Tinubu, Osinbajo Others Jubilate With Sanwo-olu After Victory

PDP Leads In Kano With Result Of One LGA Awaited