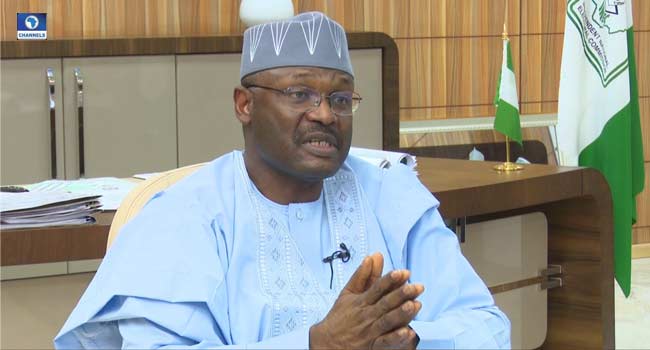 The Chairman of the Independent National Electoral Commission (INEC), Professor Mahmood Yakubu, says the commission has expunged over 1000 Permanent Voters Cards (PVCs) discovered from illegal aliens in the country.

Yakubu stated this during an interview with on Channels Television where he spoke on the INEC’s preparedness to properly clean up the voter register ahead of the February 16 presidential election.

“We have liaised with the Nigerian Immigration Service (NIS ) and they have done a fantastic job in confiscating cards where there are PVCs from aliens who registered. Remember the law says it is only Nigerians who are entitled to register and vote in our elections.

“I think now we have well over a thousand cards. The last batch submitted was well over 600 cards of aliens who registered and we have registered those from the register.”

The INEC boss explained that the commission has established a good relationship with the Immigration to identify foreigners who may want to disguise as citizens to vote during the elections.

Speaking on the voter register, Yakubu stated that he had sent the complete copy of the national register of voters.

FG Will Do Everything To Look After Families Of Slain Officers, Says Buhari

SGF Warns Against Using His Office For False And Fraudulent Information