#2019Elections: ‘Not Voting Is Not An Option’, Saraki Tells Youths 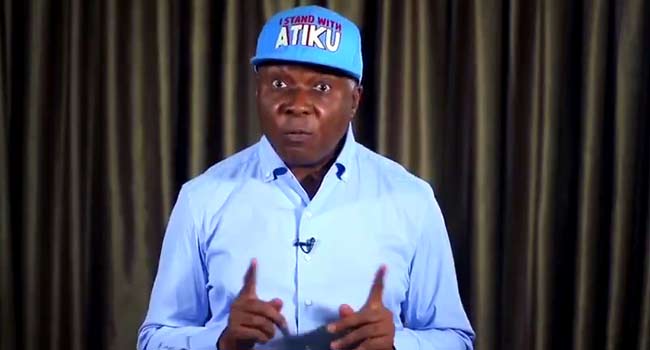 The Senate President, Dr Bukola Saraki, has called on youths across the country to ensure they go to the various polling units where they registered and cast their vote.

He made the call in a short video clip on his twitter handle on Sunday, less than one week to the general elections.

Saraki, who is also the Director General of the Peoples Democratic Party (PDP) Presidential Campaign Council, urged the youths not to consider ignoring the polls as an option.

“This message is to our youths. With over 40 per cent of registered voters, you can decide the direction of our country through your votes,” he said.

The Senate President added, “You may not be entirely satisfied with the political process, but not voting is not an option.”

In the one minute 25 seconds video, he commended the youths for collecting their Permanent Voter Cards (PVCs).

Saraki, however, insisted that it was important to vote in the elections, noting that they have the major role to play in deciding the future of the country.

He said, “You have started the process by collecting your PVCs, you must follow through and vote next Saturday.

“Today, all over the world, your generation decides who leads their various countries; Nigeria must not be different. You guys are hardworking, innovative and patriotic, so you must play a role in deciding who leads us for the next four years.”

“Come Saturday, February 16, you must come out en mass and vote. To sit at home is not an option. You have a big say in your future only if you vote,” the lawmaker insisted.

On the purported reports that the elections might be rigged, he explained that that could only happen when electorates don’t show up at the polling units.

According to him, the duo would provide larger youth participation in governance, as well as get the economy working and provide jobs for the youths if elected in the coming polls.

Watch the video below;

In 6 days, YOU will have the opportunity to decide the future of our nation.

I want YOU to come out in large numbers to vote for @Atiku, @PeterObi and @OfficialPDPNig, because if YOU show up, they can’t rig!#DefendYourVotes #NigeriaDecides #BetterNigeria pic.twitter.com/8LEim0MVJe