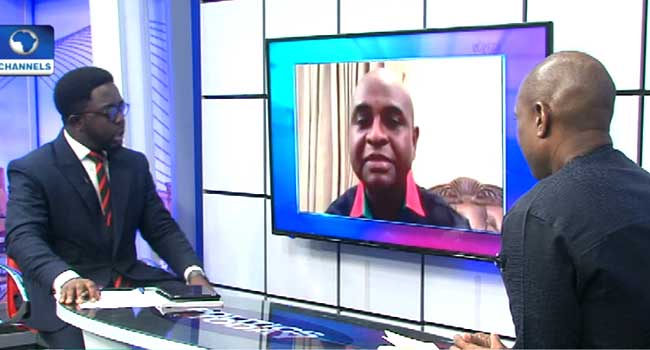 Durotoye who is contesting on the platform of the Alliance for New Nigeria (ANN) engaged Moghalu of the Young Progressive Party (YPP) in an argument during their appearance on Channels Television’s special elections programme – The Verdict.

“I really like Professor Moghalu’s optimism but one of the most interesting things is that the facts don’t lie,” the ANN candidate said.

“More recently, there was a survey that was done to show the popularity of parties. Maybe Professor Moghalu as a person may be known, but his party is not known.”

According to Durotye, the report contains the list of political parties participating in the elections in order of their level of popularity.

READ ALSO: Do Not Allow Yourselves To Be Used To Cause Violence, Buhari Begs Youths

He admitted that the two main parties – All Progressives Congress (APC) and the Peoples Democratic Party (PDP) top the chart.

The ANN candidate added that other political parties that completed the top five were his party, as well as the Social Democratic Party (SPD) and the All Progressives Grand Alliance (APGA).

“In reality, the three parties that are left from the top five are APC, PDP, and Alliance for New Nigeria (ANN), the party with the logo of a lion,” he said

Durotoye added, “So, the numbers are telling us something different from what Professor Moghalu is saying.”

In a swift reaction, the YPP candidate said he has not come to argue about his level of popularity, saying he was confident of victory.

He said, “Let me just make it very clear that I am not here to debate with anyone, the facts speak for themselves.

Professor Moghalu further took a swipe at his ANN opponent, saying his popularity is not determined by social media engagement.

He insisted that the result would speak in the elections and revealed that his party was taking steps that would earn his a shock victory at the polls.

The YPP candidate said, “We will see at the end of the day what the reality is, but I have no question in my mind that I will be sworn in as the next president of the Federal Republic of Nigeria.”

“I’m not a social media candidate, I’m on social media but I deal with real people on the ground in Nigeria who vote actually.”

Biden, Trump To Campaign In Georgia On Eve Of Crucial Senate Elections