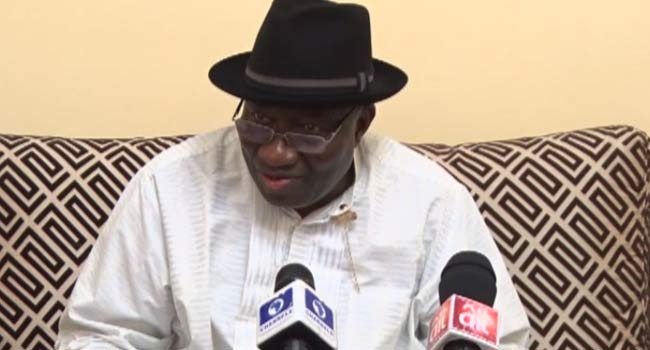 Ex-President Goodluck Jonathan has asked politicians in Nigeria to strive towards peace in the forthcoming elections, urging them to ensure that no one dies on their behalf.

The former President made the call on Monday at a meeting with Niger Delta Youth Leaders in Yenagoa.

He urged the young leaders to embrace peace and shun violence ahead of the rescheduled general elections.

“Let us conduct the election peacefully, people should vote based on their conscience”.

Jonathan said everyone who is true to his or her conscience would be able to know where to pitch their tents.

He encouraged the young people not to be induced, stressing that nobody’s ambition is worth the blood of Nigerians.

Admonishing politicians he asked, “why must another person die because you want to hold a political office?”

The former leader stated that no office is meant for one particular person, noting that the aim of getting into office should be solely for the service of the people.

Speaking about violence especially within the election period, Jonathan said peace is fundamental to growth and economic development, stressing that the nation loses value with any extra-judicial killing recorded.

“Anytime somebody is killed by a person, either by a youth or even security services that is extra-judicial, whether the police kill somebody or a military man kills somebody extra-judicially, it brings the reputation and the image of the country down,” he said.

He said if security operatives in Nigeria are interested in the future of the nation, then they must do everything to suppress extra-judicial killings, because one person killed affects the entire country.

Security Incident In State House: Buhari Was Not At Anytime In Danger – Presidency