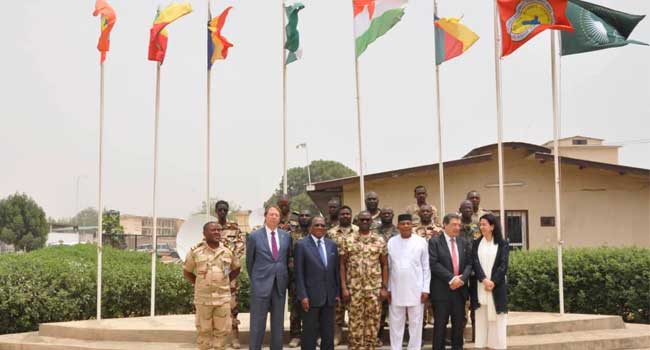 A delegation from the United Nations, the European Union have visited the Multinational Joint Task Force headquarters in N’Djamena, Chad, to proffer solutions on how to tackle Boko Haram insurgency.

Speaking during the visit Special Representative Francois Fall thanked the Force Commander, Major General Chikezie Ude for the successes recorded in the ongoing Operation YANCIN TAFKI, noting that the progress made so far is encouraging.

He observed that the Boko Haram problem requires more than a military solution, stressing that there is a need to also examine and address the socioeconomic underpinnings of the crisis.

Also speaking, Mr Angel Losada, conveyed the support and solidarity of the European Union to the MNJTF, adding that the Union will remain in partnership with the MNJTF, particularly, in the areas of political strategy and intelligence sharing.

In his contribution, Mr Mohammed Ibn Chambas, noted the serious disruption of economic activities among countries of the Lake Chad Area by Boko Haram Insurgency. He observed that a lot of efforts will be required to deal with the attendant challenges.

The Force Commander commended members of the delegation for the visit.

He remarked that the fight against Boko Haram would not have been possible without the support of the international community.

He assured the delegation that the MNJTF in conjunction with national forces will maintain its current posture in the Lake Chad Basin. Other members of the delegation were the UN Resident Coordinator in Chad, Mr Stephen Tull and the Executive Manager of the Committee against Terrorism, Michelle Coninsk.

In a related development, a delegation from the UN Security Council has also visited the MNJTF Tactical Headquarters in Diffa, Niger Republic. Briefing the team, the Deputy Force Commander, Brigadier General Seydou Badjie updated them on the current situation and the challenges facing the MNJTF.

The leader of the delegation, Mr Abdel Mahjid, said their mission is to assess the MNJTF Area of Operation with a view to making recommendations on how the UN can support African led missions.