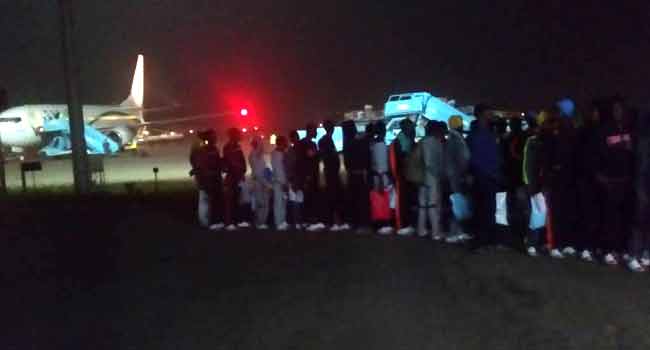 The National Emergency Management Agency (NEMA) says it has received a batch of 180 Nigerians stranded in Libya.

According to a statement from the agency on Tuesday, the returnees comprised 82 female adults, two female children, and 11 female infants.

Similarly, the males comprised 79 adults, one child, and five infants, making a total of 95 females and 85 males.

The returnees arrived aboard an airplane which landed at the Cargo Wing of the Murtala Mohammed International Airport, Ikeja in Lagos on Monday night.

They were received by the coordinator of NEMA’s Lagos Territorial Office, Mr Idris Muhammed, who urged them to make better use of their bitter experiences in positive ways.

He asked the returnees to turn a new leaf and forge ahead of the dangers and risks that they escaped in the course of their unfortunate sojourn.

Muhammed also appealed to all the segments of the society to see the menace of irregular migrations as an emergency situation.

He said that any situation where life was under threat must be considered to be an emergency and all hands must be on deck to stem to stop and prevent it.

The coordinator explained that in emergency situations, everyone has a role to play, including the media, NGO, and government agencies among others.

He also asked parents to partner and cooperate with relevant agencies to stem the menace of irregular migration through continuous enlightenment and awareness creation across the board.