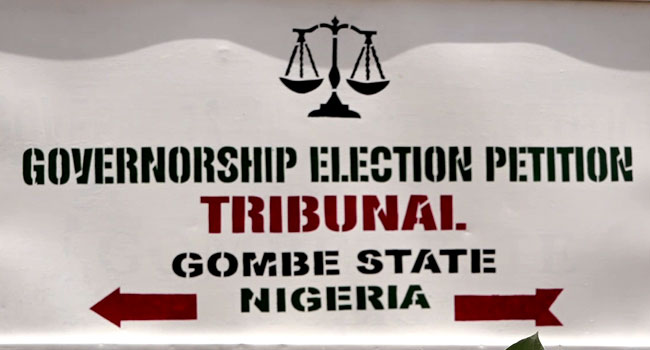 The governorship election petition tribunal sitting in Gombe today granted the prayers of three petitioners on an experte motion seeking to inspect all election materials and have certified true copies of the documents for the recently conducted polls in the state.

The petitioners Adamu Jungudo of the Peoples for Democratic Change (PDC), Muhammad Ibrahim of the All Grassroots Alliance (AGA), and Aliyu Adamu of Alliance of Social Democrats (ASD), are also requesting that the tribunal grants an order for substituted service on the first respondent Muhammadu Inuwa Yahaya of the APC.

Justice M.B Tukur, the chairman of the tribunal and two other Justices, Benneth Ilaumo and T.B Adegoke, said the orders are limited to the governorship elections that took place on the 9th of March 2019.

The secretary of the tribunal Umar Abubakar said the tribunal has received one petition for Senate, two for the Federal House of Representatives and one for State House of Assembly.

The Tribunal is sitting barely one month after INEC declared the APC candidate as the winner of the March 9 governorship election in Gombe.

According to the results announced on March 10, Yahaya polled 364,179 votes to defeat Senator Bayero Nadafa of the Peoples Democratic Party (PDP) who got 222,868 votes.