INEC To Hold Governorship Elections In Kogi, Bayelsa On Nov 2

INEC’s National Commissioner and Chairman, Voter Education and Information, Mr Festus Okoye, announced this in a statement on Tuesday.

The announcement followed a meeting of the electoral body at its headquarters in Abuja where it approved the Timetable and Schedule of Activities for the elections.

INEC explained that the official notice for both elections would be issued on August 1 while various political parties who intended to field candidates would conduct their primaries from August 2-29.

It disclosed that it has fixed August 2 for the commencement of campaigns by political parties and would end on October 31.

The commission said the political parties sponsoring candidates in the polls must submit the list of their agents for the exercise not later than October 2.

It noted that the timelines were in line with the provisions of the 1999 Constitution (as amended), as well as the Electoral Act 2010 (as amended).

INEC urged all stakeholders in the coming elections to take cognisance of its timetable and schedule of activities and adhere strictly to them.

The date for the polls was fixed following the just concluded 2019 general elections.

The commission conducted the Presidential and National Assembly elections held on February 23 while that of Governorship and State House of Assembly were conducted on March 9.

The governorship elections held in 29 states in the country.

Those, however, excluded were Kogi, Bayelsa, Osun, Ekiti, Ondo, Anambra, and Edo States.

Read the full statement from INEC below: 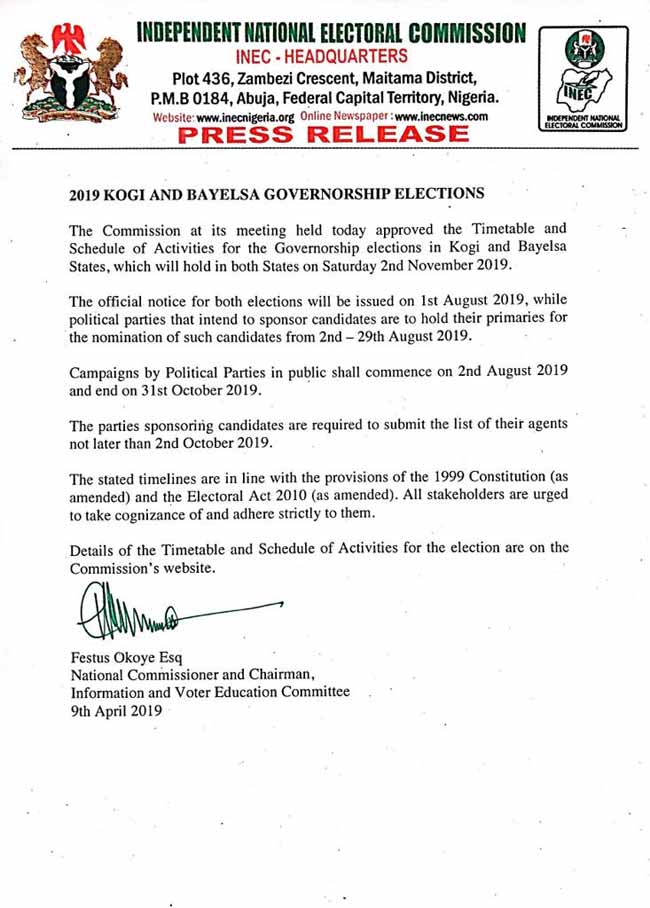