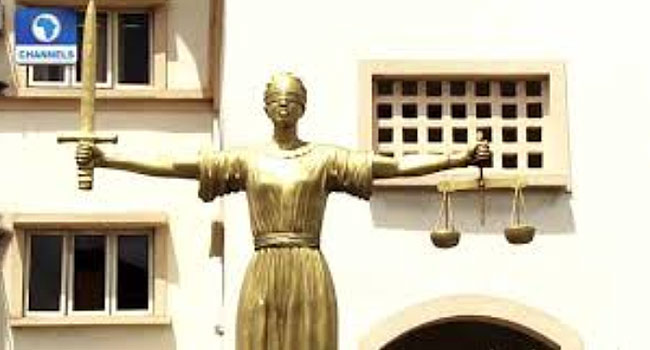 A Lagos High Court sitting in the Igbosere area has dismissed an application asking it to reject the alleged confession of a lawyer, Udeme Otike-Odibi, accused of killing her lawyer husband, Symphorosa, on May 3, 2018.

Justice Adedayo Akintoye ruled that Otike-Odibi’s request, made through her lawyer, Oluseye Banjoko, did not satisfy the requirements of the law.

The judge ordered a trial within a trial on May 23, to determine whether the confessional statement allegedly obtained from her by the police on May 4, 2018, should be admitted as having been made by her.

According to Banjoko, the statements were made without her lawyer being present and without being videoed, as required by law, among other reasons.

He relied on Section 93 of the Administration of Criminal Justice Law (ACJL) of Lagos State, 2015 and Section 35(2) of the 1999 Constitution (As amended).

But dismissing Otike-Odibi’s application, Justice Akintoye said, “This court does not find that the said confessional statement was obtained contrary to the provisions of Section 93 of the Administration of Criminal Justice Law (ACJL)”.

The judge also considered Section 35(2) of the 1999 Constitution (As amended), which provides that a person accused or detained has a right to remain silent or avoid answering any question until such person has consulted a legal practitioner.

Justice Akintoye held: “The defence counsel has not been able to establish that the defendant was not given the option to remain silent or to avoid answering any question until after consultation with a legal practitioner or any other person of her choice. This has not been proved to be so. He who asserts must prove….

“It is also important to point out that the defendant, of all people, was well aware of her right, being a legal practitioner herself and as such, could have decided not to speak to any police officer.

“To now imply that she is not aware of her rights or that the police forced her to speak, appears to be very far fetched to this court.

“The end result is that I do not find that the confessional statement is being sought to be tendered has in any way contravened the provisions of sections 93 of the Administration of Criminal Justice Law (ACJL) of Lagos State, 2015 or Section 35(2) of the 1999 Constitution (As amended).

“The prayer for an order rejecting the confessional statement for having been procured contrary to the above-stated laws is hereby refused…the motion…is hereby dismissed.”

Otike-Odibi was arraigned on June 13, 2018, on two counts of murder and misconduct with regard to a corpse.

The Lagos State Government accused her of stabbing Symphorosa Otike-Odibi to death and mutilating his corpse by severing his manhood on May 3, 2018, at their Diamond Estate, Sangotedo, Lekki, Lagos home.

She pleaded not guilty.

On January 23, a prosecution witness, Olusegun Bamidele, told the court that Otike-Odibi, 48, hit Symphorosa on the head with a frying pan several times before stabbing him on the stomach with a kitchen knife.

Bamidele said Otike-Odibi, told him that she then sat beside her husband’s corpse on the bed and said: “If this your penis is the one that is giving you license not to have the feeling of another person, it’s better we cut it off,” before proceeding to cut it off.

The witness, an assistant superintendent in the Homicide Section, State Criminal Investigation Department (CID), Panti, Yaba, said he recorded her statements with her approval, after cautioning her.

But when Director of Public Prosecutions Titilayo Shitta-Bey sought to tender Otike-Odibi’s two statements, Banjoko opposed her, following which the judge ordered a trial within a trial to determine the statements’ admissibility.

But on February 25, Otike-Odibi brought an application praying the court not to go on with the trial within a trial, rather he urged it to reject the confessional statements outright.