The National Assembly has released the details of its budget for the 2018 fiscal year.

The Office of the Senate President disclosed the details of the budget in a tweet on Friday.

It explained that the disclosure was in line with the commitment of the leadership of the 8th Assembly to accountability and transparency.

The details were released following pressure from human rights activists and civil society groups in the country.

Of the N139.5 billion earmarked for the National Assembly, the Senate got a total of N35.58 billion while the House of Representatives had N57.4 billion.

The National Assembly Office got N15.38 billion just as the legislative aides and the NASS Service Commission had N10.20 billion and N2.73 billion respectively.

Similarly, the National Assembly Legislative Institute got N4.37 billion while N1.14 billion was earmarked for service-wide-vote of the legislature.

A total of N12.3 billion was earmarked for general services while the Public Accounts Committee (PAC) of the Senate and the House got N118.97 million and N142.76 million respectively.

However, there were no figures affixed to the line items in the details of the 2018 budget released by the National Assembly.

See the breakdown of the figures below: 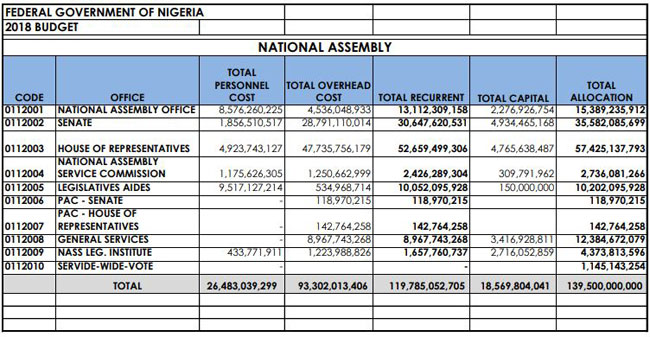 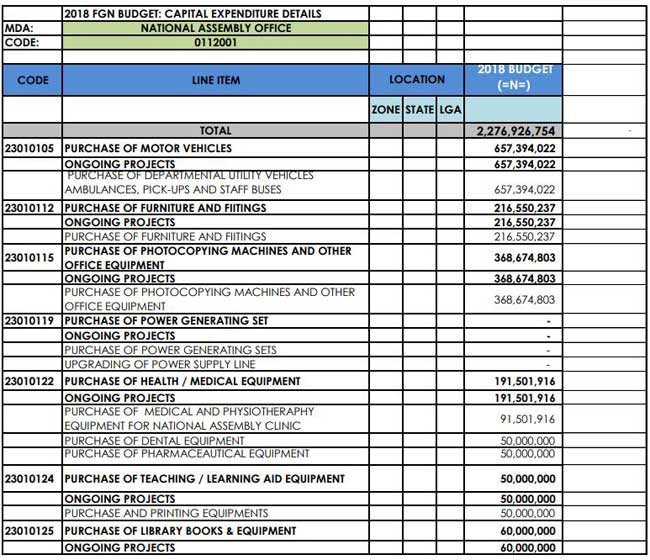 National Assembly Will Continue To Work For Nigerians – Lawan