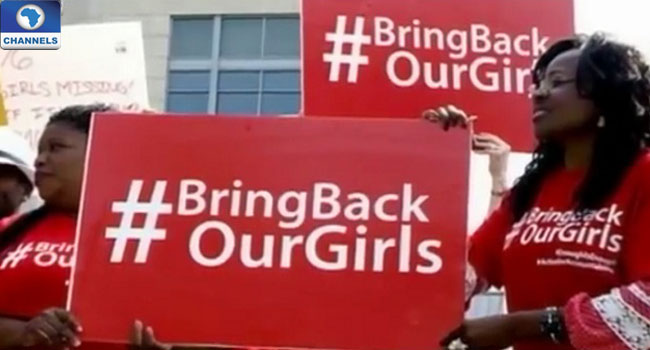 Members of the Bring Back Our Girls (BBOG) group are marking the 5th anniversary of the abduction of over 100 girls by the Boko Haram terrorist group in the Chibok community, Borno State.

The group is demanding the release of the remaining girls still held in the captivity of the terrorist group and also asking the Federal Government to make schools in the northeast safe.

In a sit-out in Lagos to honour the Chibok schoolgirls, the faces and names have been posted at the Falomo roundabout in the Ikoyi area of the state as well as other parts of Nigeria.

President Muhammadu Buhari in a statement on Saturday renewed his vow to ensure the release of the remaining Chibok girls and  Leah Sharibu in Boko Haram’s enclave.

He disclosed this in commemoration of the fifth anniversary of the abduction of the Chibok girls.

He said he is aware that the promise to rescue the girls is the main reason the people of Chibok voted overwhelmingly for him in the February election.

The President had promised the parents of the kidnapped girls when he met them at the beginning of his first term as President, that he would ensure their daughters returned home.

He said his government had so far succeeded in securing the release of 107 of the girls, he will not rest until the remaining girls are reunited with their families.

However, 112 girls are still in captivity.

On April 14, 2014, over 200 students were abducted from the Government Girls Secondary School.

The abduction of the schoolgirls triggered global condemnation including former President of the United State, Barrack Obama and his wife Michelle.