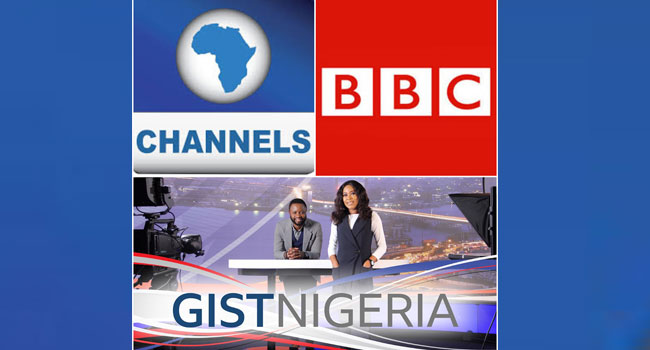 The BBC and Nigeria’s Channels Television will be launching a new current affairs programme called Gist Nigeria on April 17 on Channels TV.

Airing at 9 pm, the studio-based show will focus on the stories behind the news, with original storytelling and audience interaction via @GistNigeriaTV and its studio in Lagos.

Made by Channels Television and the BBC in Nigeria, Gist Nigeria will be a weekly half-hour programme for viewers in Nigeria, and on partner stations in Sierra Leone and Liberia.

Gist Nigeria will offer in-depth reporting, focusing on the stories behind the news, its impact and how it affects the audience. It will feature analysis, studio discussions and hard-hitting interviews around the key issues that matter to Nigerians and West Africa. The programme will also feature stories covered by a selection of the BBC‘s African services.

Broadcast from Channels Television’s new studios in Lagos, the programme will be produced to the same high standards of journalism and production that audiences around the world expect from the BBC and Channels TV.

Coverage of news will never be the same as the show’s talented duo, Wale Fakile, and Ajoke Lijadu-Ulohotse, aim to bring a new perspective to a younger audience.

Kingsley Uranta, Channels Television‘s Assistant General Manager, Operations, says; “We look forward to our viewers enjoying the best of television programme production, crafted in the cherished tradition of Channels Television which is anchored on truth, balance, fairness, and integrity.

“Of equal importance is showcasing the giant strides of our people around the world as well as highlighting those issues that demand attention on our journey to a better society’’.

Nisha Kapur, BBC Commissioning Editor, Africa says; “This partnership between the BBC and Nigeria’s leading TV channel goes beyond news coverage. It will tap into conversations going on in the country and track successful Nigerians living abroad.

“As we report and analyse regional and global news stories, Gist Nigeria wants to be free of clichés often associated with the news coverage of Africa. The programme will deliver BBC journalism in a dynamic and engaging style, based on our long-standing principles of independence, accuracy, and unbiased reporting.”

Gist Nigeria will feature the following segments each week:

SOCIAL STORY:
This segment will explore and showcase what is trending on social media

CHECK ME OUT:
It will feature successful and inspirational stories of Nigerians in the diaspora.
The new co-production will air live on Channels Television in Nigeria and will also be available on Channels24 in the UK via Freesat and Sky.