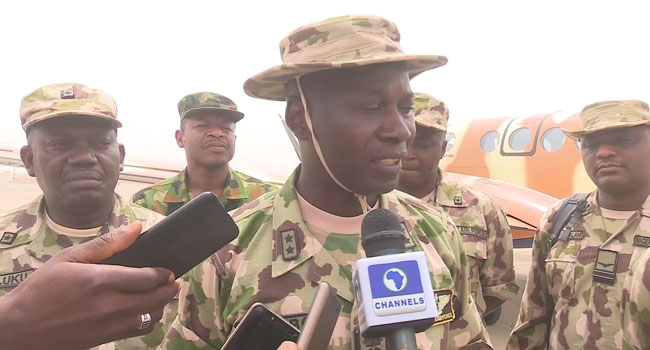 The Chief of the Air Staff, Air Marshall Sadique Abubakar, has set up a seven-member special team to investigate the alleged bombing of some civilians at Dumburum village in Zamfara state.

The leader of the team, Air Vice Marshall Idi Lubo, disclosed this to reporters on Friday shortly after their arrival at the Umar Musa Yar’Adua International Airport, Katsina State.

He explained that the mission of the team was to unravel the circumstances that led to the emergence of the allegation.

Air Vice Marshall Lubo said, “I’m here with my colleagues, seven in number. We are a special team set up by the Chief of Air Staff to investigate allegations concerning us killing some people at the village called Dumburum, that has a very thick surrounding forest in the area.”

“We want to find out every situation surrounding the allegations of this incident; we are going to do just that,” he added.

According to the air vice marshall, the committee is expected to uncover the situation that led to the incidence and discover the truth surrounding the allegations.

He also said they would meet with some stakeholders in Zamfara, including the governor and some members of the Council of Chiefs in the state.

“We are going to see if it is possible to meet with the relatives of the victims,” said Lubo.

“We are here to check into the alleged bombing of a place; if there was such an incidence, the board will uncover it. No soldier wants to kill anyone that is innocent.”

He added that the committee was to submit its report to the air chief on Thursday next week.