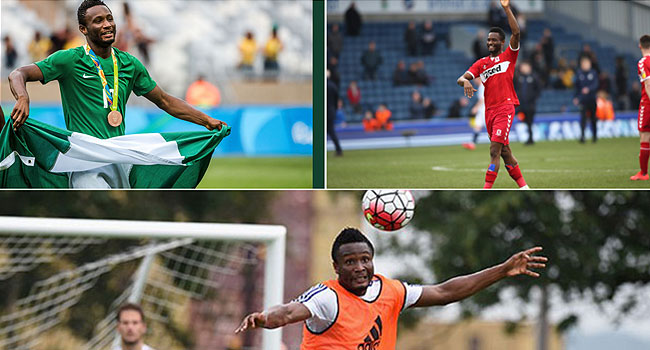 Obi who currently plays for Middlesbrough, was born on the 22nd of April 1987 in Jos, Plateau State.

Chelsea felicitated with Obi via the club’s official twitter handle, tweeting “Have a great birthday @Mikel_John_Obi!”.

In a similar vein, Middlesbrough have wished Obi a happy birthday.

“Happy birthday to @mikel_john_obi! 🎉🎂 #UTB,” the club tweeted in the early hours of Monday.

Obi who made his debut for the Super Eagles in 2005, has scored six goals in 85 appearances for Nigeria so far.

NFF tweeted, “Happy birthday to @NGSuperEagles captain, @mikel_john_obi. We wish you the best today and always. Enjoy your day!”.

Happy birthday to @NGSuperEagles captain, @mikel_john_obi. We wish you the best today and always. Enjoy your day! 🍾🍾🍾🍹🍹🎂🎂 pic.twitter.com/51wSGbxS9g

On her part, Mikel Obi’s longtime partner Olga Diyachenko has taken to Instagram to celebrate the father of her children on his birthday.

Olga shared a lovely photo of herself and the midfield marshal, accompanying the picture with a beautiful caption in which she called Obi her “Baby Daddy” in reference to the two lovely girls she bore for the footballer.

She went on to compared her love for Obi to the appealing affection which a fat child has for cakes.

Mikel will be hoping to lead his team to victory when Boro takes on Nottingham Forest in a Championship fixture later on Monday.