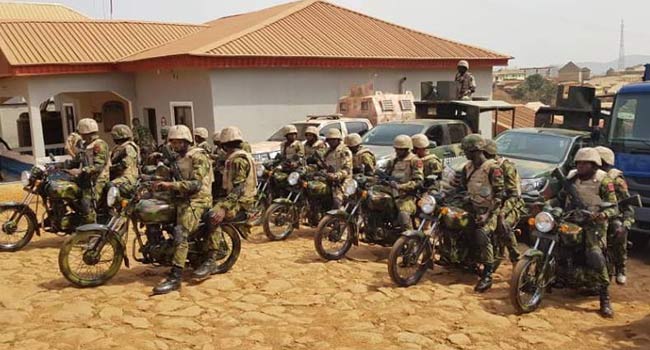 Troops of Operation Diran Mikiya have killed no fewer than 10 bandits in their camp at Sububu forest, Zamfara State.

A statement by the Director of Public Relations and Information
Nigerian Air Force, Air Commodore Ibikunle Daramola, revealed that the incident which was achieved on Monday, April 22, 2019, was carried out by the Air Task Force (ATF) who responded to a request for support by ground troops.

“The Air Task Force (ATF) for Operation DIRAN MIKIYA has neutralized no fewer than 10 armed bandits at Sububu Forest area in Zamfara State.

“This was achieved yesterday, 22 April 2019, while the ATF was responding to a request for close air support by ground troops of Sector 7 Area of Responsibility of Operation SHARAN DAJI, who had come into contact with armed bandits in Shinkafi Local Government Area (LGA).”

According to Daramola, the ATF dispatched two Alpha Jets and an attack helicopter.

He said that the bandits fired at one of the fighter jets who now engaged, killing 10 of them, while others escaped with injuries.

“Accordingly, the ATF dispatched 2 Alpha Jets and an attack helicopter to provide the needed support and also conduct armed reconnaissance over identified locations in Shinkafi LGA as well as Sububu, Dumburum Forests and its environs.

“At Sububu Forest, one of the Alpha Jets spotted a group of armed bandits, who fired at the aircraft with their rifles, whilst running for cover. The Alpha Jet engaged the bandits, neutralizing no fewer than 10 of them while others escaped with injuries.

The Air Force spokesman assured that the troops will sustain its operations to flush out bandits disturbing the Northwest region.