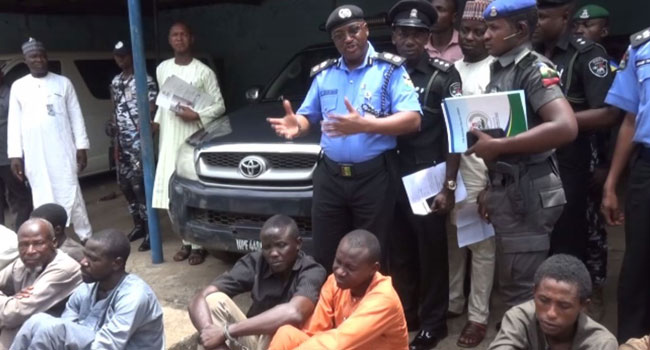 A suspect who specialises in impersonation, extortion and defamation of character has been apprehended by the Kaduna State Police Command.

The suspect, Mohammed Jamilu specialises in using the name of the state governor, Nasir El-Rufai to commit crimes by putting his victims in fear of death or grievous hurt through false information that is capable of inciting a disturbance.

The State Commissioner of Police Ahmad Abdurahman who paraded the suspect on Friday at the command headquarters said Jamilu had been having meetings with clergymen in the state, using the governor’s name to instil fears in them.

“Mohammed Jamilu is a 30-year-old who specialises in defamation of character, he chose his victims to be those that are highly placed individuals in the society, including the clergy.

“He would speak to them, try to convince them that he was hired by the state governor to eliminate them and through that, he would incite disturbance and also extort money from them.”

The CP said that the suspect has confessed to the crimes alleged and has provided useful information that will be used to charge him to court.

He added that 34 other suspects were arrested for different crimes in the state.

The police commissioner also disclosed sixteen suspected kidnappers were equally arrested by troops of Operation Puff Adder that was recently launched by the acting Inspector General of Police, Mohammed Adamu to flush out kidnappers and armed bandits along the Kaduna-Abuja highway and its environs.

“The efforts recorded so far have seen to the arrest of 34 suspects on different crimes and criminalities. These suspects belong to various gangs that terrorise the state and put the life of the citizens at risk.

The CP explained that several arms, ammunition and other dangerous weapons including “three AK47 Rifles with 27 rounds of live Ammunitions, one locally made pistol, one Dane Gun, a pair of army Camouflage uniform