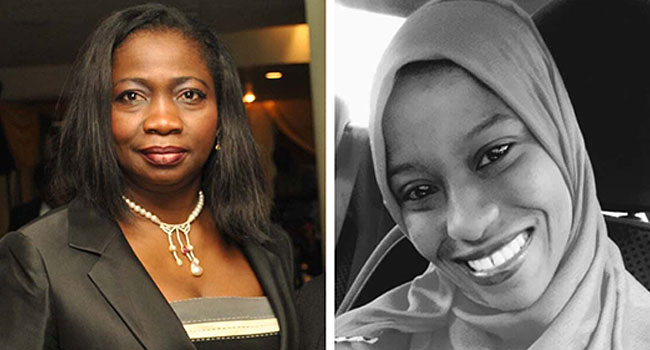 President Muhammadu Buhari has directed the Attorney-General of the Federation and Minister of Justice, Mr. Abubakar Malami, to swiftly intervene in the case of Zainab Aliyu, a student detained in Saudi Arabia for drug trafficking.

This was disclosed by Abike Dabiri-Erewa, the senior special assistant to the President on Diaspora Affairs.

In a statement made via her twitter handle, the president’s special aide said on Monday that Buhari has asked the AGF to secure the release of Zainab and some others in a similar situation.

She said, “We have been on this, in the last two weeks. @MBuhari has directed AGF to take necessary action. We are making good progress. She will be back, along with 2 others in the same situation”.

We be been on this , in the last two weeks. @MBuhari has directed AGF to take necessary action. We are making good progress. She will be back, along with 2 others in same situation https://t.co/rrQbiTTimf

Zainab who is a student of Maitama Sule University, Kano, was arrested after a banned drug, tramadol, was found in her bag. She claimed it was planted in her luggage by unknown persons.

The student had reportedly travelled from Mallam Aminu Kano International Airport in company with her mother, Mrs. Maryam Aliyu, and sister, Hajara Aliyu, but was arrested over allegations that a bag bearing her name tag contained the unlawful substance.

Reports suggest that it was later discovered that Zainab like some others, was a victim of a cartel that specialises in planting hard drugs and banned substances in travellers’ bags.

Some members of the cartel are said to already be in the custody of the National Drug Law Enforcement Agency (NAFDAC).

Xenophobic Attacks: We Are Reaching A Tipping Point – Dabiri-Erewa