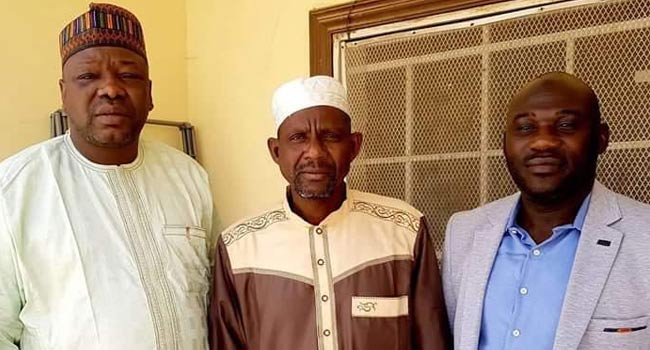 Friday Akpan, an acting spokesperson for the ministry of foreign affairs had earlier announced that Abubakar would be released soon

However, the confirmation of his release was announced on Thursday by Bashir Ahmad, media aide to President Muhammadu Buhari.

Ahmad made this known via his official Twitter handle.

He tweeted,  “PHOTO: Saudi Authorities release Mallam Ibrahim Abubakar to the Nigerian Consulate in Jeddah, KSA. He was arrested over alleged drug trafficking, the same offence as Zainab Habib Aliyu, who was also released recently”.

Abubakar’s release comes two days after Zainab Aliyu, a student of Yusuf Maitama Sule University, Kano, regained freedom after being arrested by the Saudi authorities for alleged possession of Tramadol, a drug which is termed as illicit in Saudi Arabia.

In his earlier statement, Friday Akpan, the Foreign Ministry’s spokesman, said the Consulate General of Nigeria in Jeddah, upon instruction from Headquarters, sent series of Diplomatic Notes to the Saudi Foreign Ministry informing of the arrest of members of the syndicate in Kano and forwarding the report of the NDLEA investigation.

Mr. Akpan’s communique further stated that “to ensure that our intervention was effective, another Note was sent by our Embassy in Riyadh conveying the same message to the Saudi Authorities. On Friday 26 April 2019, a Note was sent to both the Saudi Embassy in Abuja and its Consulate in Kano, forwarding court documents of members of the Kano syndicate on trial.

“With determination to achieve a tangible result, officials in the Consulate secured an appointment to meet with the Director General of the Saudi Foreign Ministry, Jeddah Branch and requested him to forward the NDLEA report to all concerned Saudi agencies with a view to releasing Zainab Aliyu and Ibrahim Abubakar.

“Furthermore, the Acting Consul-General in Jeddah had a telephone conversation with the Legal Adviser of the Saudi Foreign Ministry on Monday 29th April 2019 and he gave assurances that the Ministry was going to meet to consider the reports sent to them to facilitate the resolution of the case of Zainab Aliyu and Ibrahim Abubakar.

“Fortunately, these efforts in the past few weeks culminated in the release of Zainab Aliyu on Tuesday 30 April 2019 and Ibrahim Abubakar of Wednesday 1 May 2019”.

The spokesman said the ministry appreciates the role played by relevant authorities in Nigeria and Saudi Arabia that led to the release of Zainab and Ibrahim.

He also reiterated the ministry’s commitment to the protection of Nigerians outside the country.