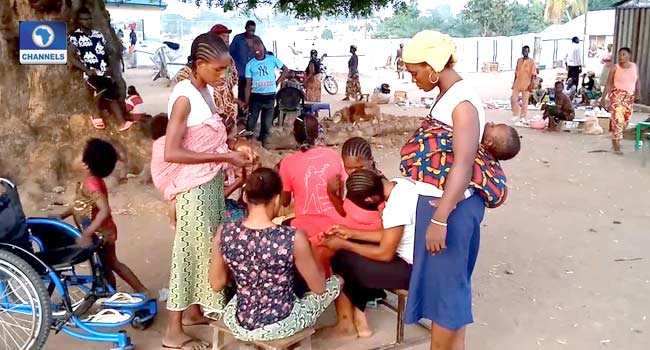 The Benue State Government says it is investigating allegations of rape of victims at the Internally Displaced Camps.

This follows the rising menace of rape and gender-based violence wrought against female IDPs often resulting in unwanted pregnancies.

A victim who craved anonymity told Channels Television said a female member of the vigilante group took her away to a waiting security official.

According to her, the security personnel ignored several pleas by some women and forcefully raped her.

Speaking in her native language, she said: “It was night, the man grabbed me and was dragging me towards his vehicle. I pleaded with him to let me go but he refused.

“So I gestured towards the direction where I thought there will be people who would rescue me. When we got there, we met only two women in the room who had just put to birth.

“So I held onto the door, but he pulled me away. One of the women in the camps heard my screams and came to plead with him to leave me alone but he wouldn’t listen. Instead, he grabbed me into another shelter where he raped me.”

Although none of the security agencies in the state has reacted to the allegation as at the time of filing this report.

But Speaking to Channels Television, the Executive Secretary of the State Emergency Management Agency, Emmanuel Shior confirmed the incident.