Group Protests Against Creation Of Four More Emirates In Kano 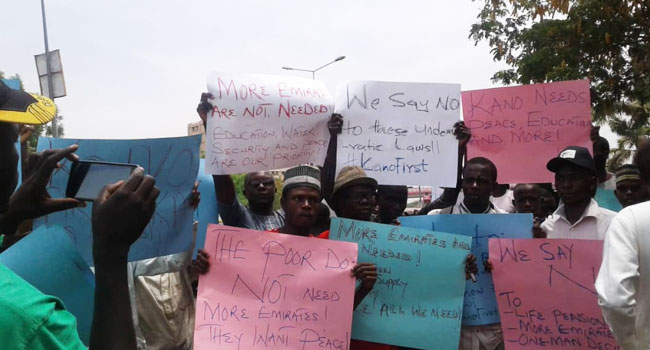 A group called Kano First has led a protest against the creation of four more emirates in Kano State.

Members of the group gathered at Gidan Muritala, carrying placards and expressing their displeasure over the passage of the bill by the state House of Assembly.

Following the passage of the bill on Wednesday, Governor Ibrahim Ganduje also assented to it.

The bill paves way for the decentralisation of the Kano Emirate council thereby decentralising the power of Emir.

The group, however, urged the government to focus on more pressing issues, such as deflation of revenues, healthcare, security and educational challenges.

According to them, the creation of more emirates will lead to spending of unnecessary funds.

They, therefore, called for intervention from the presidency and other stakeholders to refrain the governor from creating the four new emirates and tampering with the cultural heritage of the state.