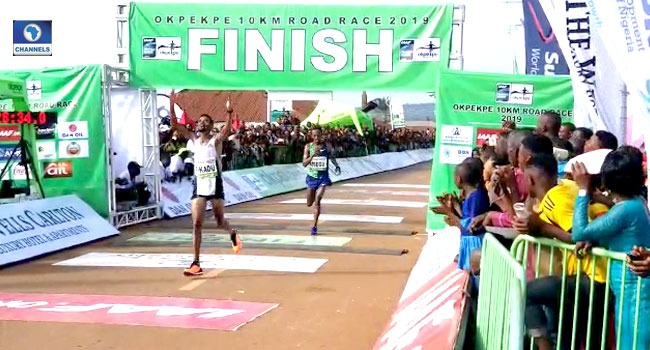 A Bahraini, Dawit Fikadu, has emerged the winner of the 7th Okpekpe race which held in Edo State, South-South Nigeria.

His winning the 10 kilometre road race has set a new course record of 28 minutes 48 seconds while Sheila Chelangat of Kenya won in the female category.

Speaking to Channels Television after the race, Fikadu who is third time lucky having come 9th in 2017, 2nd last year said that the weather conditions were a bit harsh due.

According to him, this is as a result of the scorching sun compared to the last edition where it rained.

Similarly, Chelangat, who is participating for the time also complained about the hot weather.

Speaking at the end of the game, the Sports Minister, Solomon Dalong, commended the Edo State Government for the improvements in this year’s edition.

He, however, called for more participation from the local community in subsequent editions of the competition.