Mixed reactions have trailed the ongoing electoral exercise in Edo state, with various reports of electoral gadgets malfunctioning, claims of vote-buying, and pockets of palpable chaos nipped in the bud.

In the early hours of Saturday, there was mild tension at Emokpae Model Primary School in Oredo Local Government Area of the state, where Governor Godwin Obaseki, who is one of the candidates in the poll, went to cast his vote.

The fracas resulted from a misunderstanding between an agent of a political party and a supposed election observer. This occurred while some officials of the Independent National Electoral Commission (INEC) were setting up for the election.

The party agent is said to have mistaken the observer for another party agent and challenged him for sitting on a seat meant for the electoral officials. As a result, both men engaged in an altercation as other electorates at the venue watched.

The situation was later brought under control following the intervention of the security agencies on the ground.

After having stood for a couple of hours at his polling unit, the incumbent governor and candidate of the Peoples Democratic Party (PDP) in the Edo election, Godwin Obaseki, finally got his chance to cast his vote.

Speak after voting, Governor Obaseki said, he was “surprised” and “shocked” at the slowness of card readers after he cast his vote in the Governorship poll being held in the state.

He said it is sad that such a glitch is being experienced after INEC had given assurances that such problems would be avoided.

I have no complaints, the process is okay says Ize-Iyamu

While Governor Obaseki is decrying the slowness of card readers, his major opponent in the guber race, Pastor Osagie Ize-Iyamu says he has no complaints about the process so far.

After casting his vote in Iguododo ward five, unit 26 of the Orhiomwon local govt, the candidate of the All Progressives Congress (APC), said, “I have no complaints, the process is okay; the INEC people came on time; they appear to be well prepared; so far, so good.”

He further stated that sometimes, proceedings are delayed for too long, adding that since the INEC officials started the process early, then it means that the pressure is “not there” which is quite good.

Mr Ize-Iyamu said he is happy that in some places, they have started voting which is good, according to him, the feedback from his people at other venues suggest that all is going on well.

Meanwhile, Mr. Johnson Alalibo, the INEC Resident Electoral Commissioner (REC) in Edo State says all is well with the electoral exercise in this state, a claim aimed at dismissing contrary claims by Governor Obaseki.

According to the commissioner, there are not so many queues as reported, and as such, no one can really say the process is slow.

In a similar vein, the deputy governor of Edo State, Mr Philip Shaibu has said that though there have a few not too palatable reports, the election is going on peacefully.

A confident Shaibu told newsmen he is confident in the outcome of the polls if things are not altered from the state in which they are.

The deputy governor who in the late hours of the morning voted at his polling unit in Jattu, Etsako West local government, said “So far so good, apart from the report I am getting from some places that vote-buying, we have told them that anywhere they find anybody buying votes, they should let us know.

“I am happy that EFCC is also moving. So there is a particular person they are trailing now. Apart from that, the election is peaceful. You can see there is no violence in this ward.

“It is peaceful and things are going on well apart from some reports I am getting in other centres like in Auchi, I learnt they were buying votes (from) the former local government chairman.

“We have also alerted security. Apart from that, I think the violent aspect of this election so far is out.”

The running mate to Governor Obaseki said he is satisfied with the turn out of voters, but stressed that things would have been more if not for initial tension that followed the electioneering campaign.

Over 480,000 voters will not be able to partake in the ongoing election in Edo State, this is according to the Independent National Electoral Commission (INEC).

In a booklet giving statistical details of proceedings in Edo State, INEC revealed that out of 2,210,534 registered voters, only 1,726,738 would be allowed to participate in the governorship election.

The communique further revealed that 483,796 voters would not be allowed to participate in the exercise because they didn’t collect their permanent voter cards (PVCs).

The Commission also stated that the election will be conducted in 2,627 polling units in 192 electoral wards across the 18 local government areas (LGAs) in the state. While the people of Edo State on Saturday stormed various polling units to elect the candidate of their choice in the governorship election, INEC officials were on the ground to enforce the use of face mask as part of COVID-19 directives for the election.

At several polling units visited by Channels Television, Security officials and officials of the Independent National Electoral Commission (INEC) came very early with sensitive electoral materials but did not begin the exercise till preparations to ensure that COVID-19 protocols were fully observed at the venues. 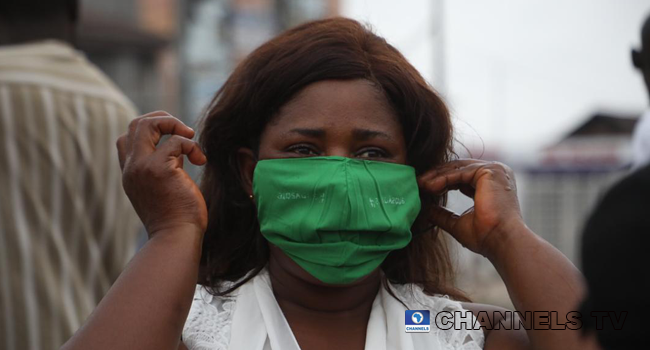 The directive of ‘no face mask, no vote’ was strictly observed as some electorate were given face masks by some health officials at the entrance of various venues for the election.

Similarly, voters’ temperatures were checked while they were given hand sanitiser before proceeding to the polling booth.

However, the social distancing protocol was not fully adhered to due to the huge crowd at the venue of the election.