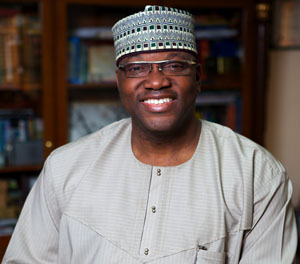 John Momoh is the Chairman of Channels Media Group and Chairman and Chief Executive Officer of Channels Television. He is a renowned broadcast journalist with a vast experience spanning more than four decades.

In 25 years, he has gone from being a star employee to creating a multi-million dollar media enterprise, employing over 400 staff, across Nigeria and Africa, and reaching the World, with the same business model that analysts predicted would fail. His vision, passion and tenacity are balanced by a willingness to re-invent and pivot where necessary.

John Momoh’s commitment to excellence has seen him and his Companies nominated and winning awards and recognitions over several decades. These include:

John is an alumnus of the prestigious Harvard Business School and the Lagos Business School.
A graduate of the University of Lagos with a Masters degree in International Law and Diplomacy, and a B.Sc (with honours) in Mass Communication, John Momoh also received Diplomas from the Thomson Foundation Cardiff, Wales.

He is a fellow of the following institutions:

John is the immediate past Chairman of the Broadcasting Organisations of Nigeria, BON the first private broadcaster to be so elected to lead the organisation.

He is a recipient many honors including;

John Momoh is a member of the International Academy of Television Arts & Sciences based in New York. He serves as a JUROR for the annual International ‘Emmy Awards’ and the ‘AIB’ Awards UK, organised by The Association for International Broadcasting.

His television station Channels TV is the only Nigerian and indeed African Broadcaster to have won the “Television Station of the Year” Award, a record Thirteen times, seven of them consecutively.

A Red Cross Ambassador, John sits on the board of many non-governmental organisations including:

In recognition of his entrepreneurial dynamism, four Nigerian Universities have conferred honorary doctorate degrees on him. They include:

John Momoh is happily married to Sola, also a broadcaster, and they are blessed with three children.