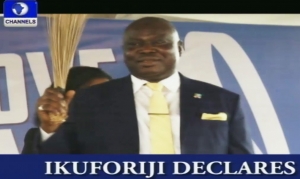 The Speaker of the Lagos State House of Assembly, Adeyemi Ikuforiji, has officially made public, his intention to run for 2015 Lagos governorship election.

The All Progressives Congress (APC) governorship aspirant said that if elected, job creation and poverty alleviation would form part of his ten-point cardinal agenda.

He was speaking at De Blue Roof, Alausa Ikeja, venue of his official declaration of his intention to run for the state governorship.

“I offer myself as a candidate with a clear vision of a greater Lagos and a commitment to leading the state on a new journey which will consolidate the gains of the past.”

He also promised to make Lagos a global city and Africa’s economic hub if elected.

“I have used my time and energy in helping not only to build democracy in Lagos State but to also expand the frontiers of Government, transparency and accountability.

“I have also struggled to ensure that Lagos State maintains its place in the nation and indeed becomes Africa’s pre-eminent city,” he said.

Several party members thronged the venue of the declaration to support Ikuforiji’s ambition, and some of them expressed belief that Lagos State would experience the desired progress under his leadership.

Mr Ikuforiji was born in Epe in Lagos State on August 24, 1958. He attended Epe Grammar School and later the University of Lagos.

He served as a member of the State Technical Committee of Eko Transport Service Limited. He is the longest serving Speaker of a House of Assembly in Nigeria.