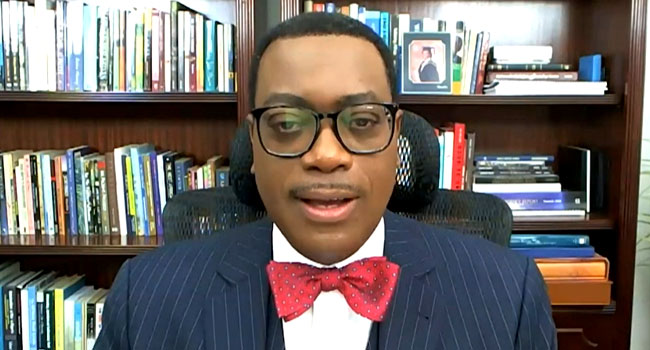 Re-elected President of the African Development Bank, Dr Akinwumi Adesina, will be sworn-in on Tuesday, September 1, to serve a five-year term.

The ceremony, according to the AfDB in a statement on Monday, will be held virtually at 9am.

Dr Adesina, Nigeria’s former Minister of Agriculture and Rural Development, was re-elected last week after getting a hundred percent votes of all regional and non-regional members of the Bank.

The election took place on the final day of the 2020 Annual Meetings of the multilateral bank held virtually, and the Chairperson of the Board of Governors of the Bank, Mrs. Niale Kaba, Minister of National Planning of Côte d’Ivoire announced his victory, making him the first Nigerian to be elected and re-elected to serve as the bank’s President.

Dr Adesina’s first term in office focused on new agenda for the Bank Group based on five development priorities known as the High 5s: Light up and Power Africa; Feed Africa; Industrialize Africa; Integrate Africa; and Improve the Quality of Life for the People of Africa.

In his speech after the announcement, Dr Adesina said, “I am deeply grateful for the collective trust, strong confidence and support of our shareholders for electing me for a second term as President. It is yet another call for selfless service to Africa and the African Development Bank, to which I will passionately devote myself.”

Dr Adesina was able to weather the storm of favouritism, corruption, and other allegations after an independent Review Panel cleared him of any ethical wrongdoings.

In January this year, Dr Adesina was accused of ethical misconduct by a group of whistle-blowers on 16 allegations, which was reviewed by the Bank’s Ethics Committee of the Board of Directors in March and described the allegations as frivolous and without merit.