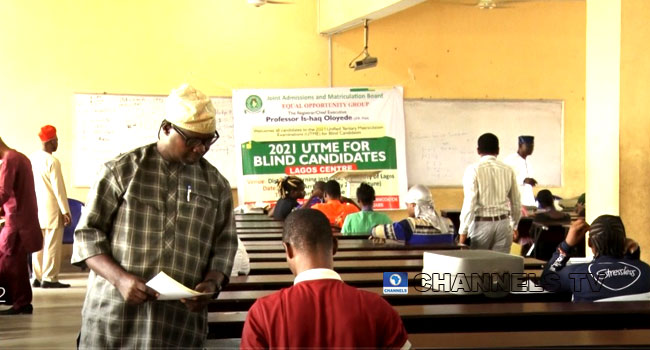 Visually impaired persons numbering 335 recently sat for the 2021 UTME in the eleven centres across Nigeria.

The Joint Admission and Matriculation Board through its initiative called JAMB equal opportunity group provided assistance to the special candidates during registration, examination and admission processing for them.

This was disclosed on Thursday by Professor Peter Okebukola, Chairman of the Joint Admission and Matriculation Board (JAMB) equal opportunity group.

He said the initiative is that of the registrar Professor Ishaq Oloyede and it is aimed at addressing the challenge faced by the special candidates.

“The goal of the Oloyede-led JAMB is to ensure that no Nigerian who is eligible, is prevented from taking the UTME regardless of disability. He holds the firm view that we must have a level playing field for all candidates.

“As long as the candidate is intellectually capable and meets the minimum conditions for admission in the university, polytechnic, college of education of choice, he/she should have a good chance of admission placement,” Okebukola said.

According to the group, since the inception of the initiative in 2017, over 1680 candidates have been processed for the unified examination with more than 560 assisted with admission to universities and other higher education institutions for the courses of their choice. The group added that of the 390 candidates who sat for the examinations in 2019, a total of 175 representing 44.8% got admitted to the respective courses of choice.

Professor Okebukola said he was impressed by the growing number of universities and other degree-awarding institutions joining the effort to raise the quota of admission for challenged applicants.

At the Lagos centre which catered for candidates in Ogun and Lagos states, the group leader said JAMB provided accommodation, feeding and transport supplementation for all the candidates and their guides.

The other centres are in Abuja, Ado-Ekiti, Bauchi, Benin, Enugu, Jos, Kano, Kebbi, Oyo and Yola.

The Chief examiner of the Lagos centre, Professor Rafiu Okuneye highlighted the need for a demo that introduced the candidates to what to expect when the real question and answer papers are served. The results of the two-day examination which held between Wednesday, June 30 and Thursday, July 1, 2021, is expected to be ready once the exercise is over.

For the 2021 exercise, the mode of examination administration was a blend of the use of personal computers, braille slate and typewriters to answer questions. The interventionist group is however hoping for a gradual upgrade to the use of advanced technology so that the candidates could write their papers alongside other candidates. The Joint Admissions and Matriculation Board (JAMB) has called on applicants who have been cleared to complete their registration for the 2021 Unified Tertiary Matriculation Examination (UTME) by Tuesday.

Dr Fabian Benjamin, JAMB’s Head of Media, made the call on behalf of the examination body in a statement on Monday.

He noted that JAMB had extended the registration period by another two weeks up to May 29 after the period originally scheduled for 2021/2022 UTME/DE registration lapsed on May 15.

The examination which was initially planned to hold between June 5 and 19 has now been scheduled to take place from June 19 to July 3.

The JAMB’s spokesman explained that this was to accommodate candidates who, largely due to issues related to the newly introduced pre-requisite of National Identification Number (NIN), could not register for the exam.

He stated that an additional extension of two weeks was made to compile the list of all prospective candidates who, for any reason, were unable to register.

“The candidates who have not registered but have secured the profile codes and initiated the registration process are expected to visit specially designated registration centres to complete the registration on Tuesday, June 15, 2021,” Benjamin said.

He added, “Designated registration centre for each candidate is being forwarded to him/her through the GSM text (SMS) messages and available on the website of the Board (www.jamb.gov.ng) from 12 noon on Monday, June 14, 2021.”

The JAMB spokesman informed the applicants that the identification number on each form given to the candidates had been used to assign the candidates to their registration centres.

According to him, only candidates who have secured their profile codes are expected to visit the centres.

Benjamin stated that the few who have not yet obtained their NIN or profile codes have been forwarded to National Identity Management Commission (NIMC) and would be contacted as soon as they were cleared by the agency.

“Each candidate posted to any non-JAMB-owned CBT centre is expected to pay the registration fee of N1,000 to such CBT centre,” he said.

The possibility of shifting the date for the 2021 Unified Tertiary Matriculation Examination (UTME) is very high, the Joint Admissions and Matriculation Board (JAMB) has said.

JAMB Registrar, Professor Ishaq Oloyede, explained that this was because of the inability of at least 600,000 candidates who have indicated interest to participate, to register for the examination scheduled to hold between June 5 and 19.

Speaking at a virtual meeting with 2021 UTME committee members on Friday, he disclosed that 1.1 million candidates have so far registered for the 2021 UTME, and the board anticipated approximately 1.9 million registrations at the end of the exercise.

The JAMB boss noted that while 50 per cent of the candidates have already registered without problem, there was a need to carry everyone along.

He stated that at the end of the meeting with the stakeholders, they would decide on whether to shift the exam forward or not.

“The possibility of shifting the exam forward is still high, but that will be determined after our meeting with stakeholders,” said Professor Oloyede.

He added, “This is because about 600,000 candidates who have indicated interest in the exam are yet to register. There is a need to give everyone the opportunity.”

The NIN, which is a unique number that identifies individuals, is issued by the country’s National Identity Management Commission (NIMC) upon enrolment.

The JAMB registrar apologised for the new initiatives introduced in the 2021 UTME, noting that it was not to punish candidates but to expose candidates who engage in the habit of indulging in various forms of malpractices.

While calling on the candidates to take note of the process, Professor Oloyede clarified that the essence was to dictate any disparity in the process.

“We apologise for putting you through some hardship in the registration. The government directed that anyone participating in JAMB must have their NIN. This is beyond our control. Those who are yet to register should do so.

“The MOCK exam is bill to come up on Thursday. It is an exam meant to test out capability. As you all know, the main exam is coming up on June 5 and 19, 2021,” he told the meeting.

The JAMB boss added, “We are meeting with stakeholders today to discuss the issues and on whether we will shift the exam date forward or not. We will brief the media on the outcome of the meeting tomorrow.

“Shifting the exam date is not the solution; at the meeting, we will discuss how some of the problems encountered by candidates would be resolved. It is important that we carry everyone along.”

He revealed that JAMB has secured about 802 exam centres across the country and 104 centres in towns. 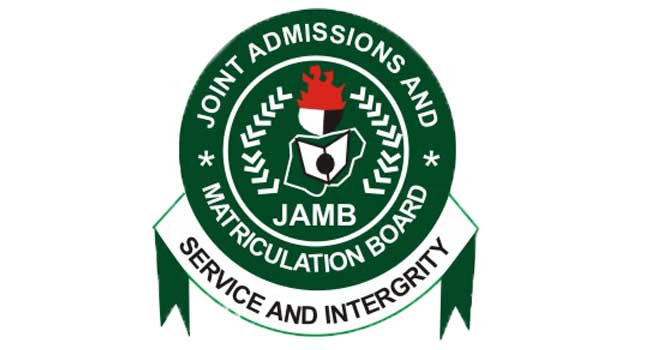 The Joint Admissions and Matriculation Board (JAMB) on Wednesday announced the date for the 2021 Unified Tertiary Matriculation Examination (UTME), the registration date as well as other details for the process.

JAMB in a statement noted that the registration for the 2021 UTME will take place in selected centres across the country.

Here are five key points or things to note about the 2021 UTME registration as released by JAMB:

According to the examination body, candidates interested in registering for the 2021 UTME must supply their National Identity Number (NIN) to complete the process.

JAMB also announced the 2021 UTME registration date, saying the portal will open from Thursday, 8th April to Saturday, 15th May 2021. The examination body, however, warned that there would not be an extension for the sales of form for this year’s UTME.

It also approved 700 centres for the exercise, explaining that the selected places are available on the JAMB portal.

In the statement, JAMB said that “The registration fee for the 2021 application documents is N3, 500 and N500 for the recommended Reading Text.”

Further details about the registration process and the requirements have not been released yet for the 2021 UTME, according to the body.

“Information regarding other registration processes and requirements would be made available on the Board’s website and advertised in the electronics and print media from 5th April 2021,” it further explained.