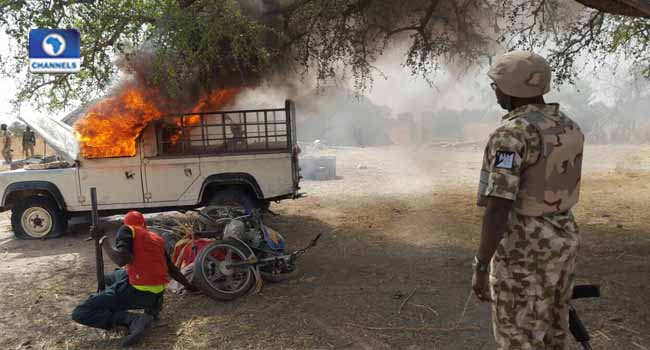 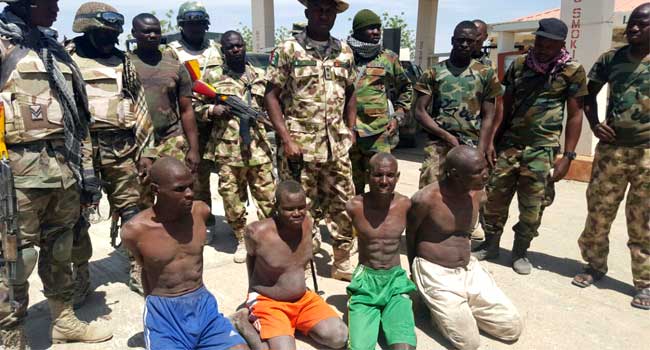 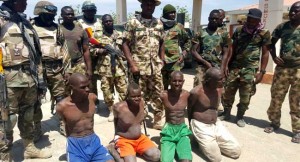 The Nigerian Army has announced the arrest of four men suspected to be specialized in illegal trades and other criminal activities to sustain the Boko Haram terrorists.

The Acting Director Army Public Relations, Colonel Sani Usman made this known in a statement on Friday.

“The arrested kingpins specialized on various aspects of criminality to sustain the Boko Haram terrorists group in their areas.

“The four terrorists were arrested following a tip off by well-meaning members of the public.

“Subsequently, the troops conducted a cordon and search operation in the general area that led to the apprehension of the terrorist leaders, who contribute to the sustenance of the insurgency through their illegal trade specialization.

“Presently the suspects are undergoing interrogation,” the statement read.

Troops have killed two Boko Haram members and rescued two children as they clear terrorists in some villages of Bama Local Government Area.

A statement by the Nigerian Army spokesman, Colonel Sani Usman, said that troops of 7 Division Strike Group Team B and 22 Task Force Brigade made the feat.

This was achieved while they conducted a simultaneous dawn raid on suspected Boko Haram militants’ hideouts in Biggoro, Warpaya and Aura North of Kumshe in Bama Local Government Area of Borno State, northeast Nigeria.

The essence of the operation, according to the statement, was to stop the reported criminal activities of remnants of Boko Haram terrorists hiding in the three villages.

“This became necessary as previous efforts were futile (and) the suspected terrorists kept coming in search for food, water and shelter.

“The surprised dawn attack yielded positive result as the troops discovered well concealed observation posts on trees in the villages constructed by the terrorists, to give them early warning of troops movement or approach.

“In addition, the troops found out that the observation posts on tree tops, were constructed in such manner with chairs and ropes to pull up foods and other needs by the sentry without necessarily coming down the trees.

“To also save for the rainy day, the terrorists had underground food storage facilities where they stocked large quantity of foodstuffs,” the statement read.

The Nigerian Army also revealed that three AK-47 rifles, magazines, ammunition and two motorcycles were recovered from them.