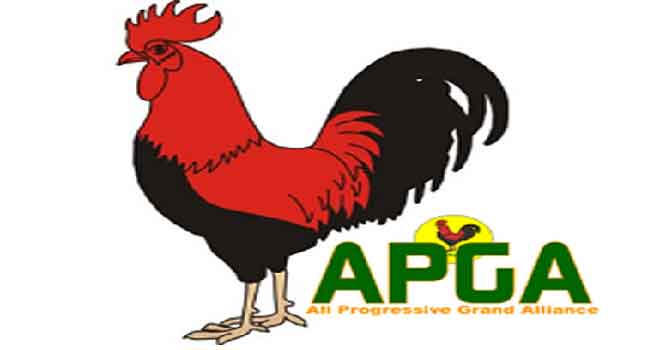 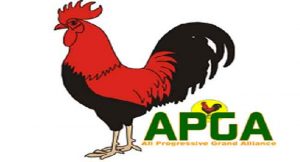 Members and supporters of the All Progressives Grand Alliance (APGA), from Aba South Local Government Area of Abia state, have stormed the office of the State Independent Electoral Commission (ABSIEC), to protest the removal of their candidate for the December 17, local government election.

The protesters numbering about 100, were seen carrying placards with different inscriptions including “ABSIEC stop meddling in APGA affairs, “Akomas leave APGA alone,” “Ujoumunna is our sole candidate for Aba South LGA”, amongst others.

They accused the electoral commission of meddling into the affairs of the party and called on the Chairman of the Commission, Justice Akomas, to do the needful by restoring the name of Ujoumunna, as the rightful chairmanship candidate of APGA for Aba south local government area.

Speaking on behalf of the protesters, the party’s legal adviser in the council, Mr Emma Eke Okorie, vowed that Iwuanyawu would never be the chairman of the local government area, and appealed to the commission to address the issue.

He also threatened legal action if the commission failed to restore the name of Ujoumunna as the chairmanship candidate of the party.

“The name of our candidate, who won the party’s primary election, is Elder Ujoumunna.

“We are surprised to see that it has been allegedly and illegally substituted with the name of one Mr Iwuanyawu Charles, who came second at the party’s primary election in Aba South Local Government Area.

“We call on the Chairman of the Commission, Justice Akomas to do the needful and immediately restore the name of elder ujoumunna as the rightful chairmanship candidate of APGA for Aba south local government area.”

Addressing the protesting APGA members, the Director Of Administration at the commission, Mr Kingsley Nwokoro, assured the protesters that their problem would be looked into, stating that it was not the fault of the commission.

“The commission acted based on the information given to them by political parties.

“It is not our fault but we will look into the matter passionately, I urge you to go back to your party leadership to ratify the issue and report back to the commission,” he said.

Meanwhile, the State Chairman of the party, Rev. Austin Ehiemere, has exonerated the party from the matter and commended the protesters for their peaceful conduct.