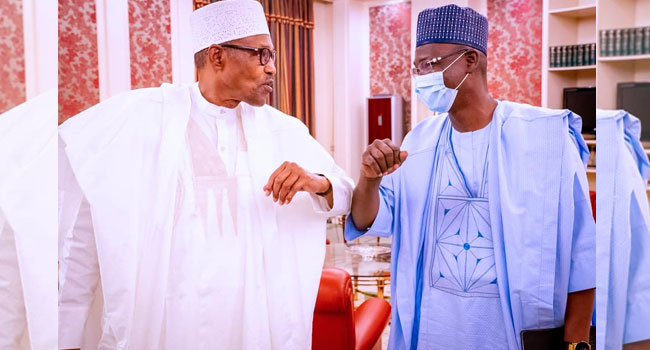 The governor also sought the intervention of the Federal Government particularly for them to take over the Jitata road in Nasarawa, which serves as an alternative route from the state to the FCT.

The governor after the meeting with President Buhari told journalists that he came to meet with the president to discuss the security issues in Nasarawa State.

According to him, many of the Boko Haram insurgents are regrouping in Nasarawa State and they belong to the Darussalam group that had been dislodged from Niger State.

He said further that upon a joint security operation, a lot of them were killed while 900 were arrested. Governor Sule maintained that those arrested confirmed their membership of the Boko Haram insurgency group and have been handed over to the authorities.

“I have come to see the leader of our party and the leader of the nation and our father, Mr President, to brief him about the activities happening in the state, especially in the area of security.

“We have continued to have challenges with a team of Boko Haram who were settled at the border with the FCT. We thank the security forces that were able to dislodge them. Now, they have gone back and gathered at our border with Benue and they are causing a lot of havoc,” the governor said.

The Nasarawa State Government had earlier in November announced plans to restructure its security apparatus due to killings and insecurity.

The Governor made the announcement during an emergency security meeting in Lafia, the state capital following the murder of the chairman of the All Progressives Congress (APC) in Nasarawa, Phillips Shekwo.

A Fulani traditional ruler and an unidentified young man were also killed during the same period.

The security meeting was attended by the heads of various security outfits in the state, as well as the Chairman of the Nasarawa State Traditional Council, Justice Sidi Bage, among other stakeholders.