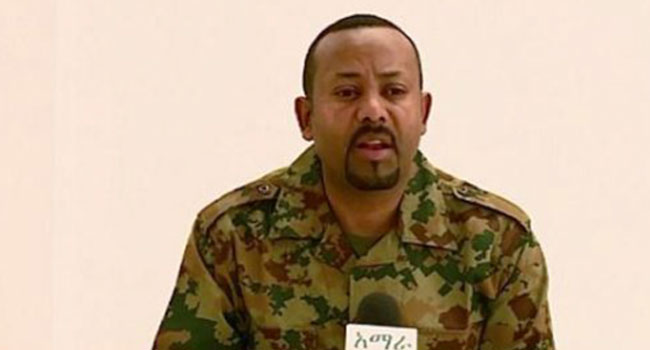 Ethiopia’s Prime Minister Abiy Ahmed said Wednesday that he was returning to Addis Ababa from the battlefront after pro-government forces claimed major advances in their fight against Tigrayan rebels.

The government on Monday said pro-Abiy forces had retaken the strategic towns of Dessie and Kombolcha, the latest turn in the 13-month-old war.

After the Tigray People’s Liberation Front (TPLF) rebel group reported significant territorial gains as part of a march towards Addis Ababa, Abiy announced last month that he would head to the battlefront, handing over his regular duties to his deputy.

Since then, state media has broadcast images of a uniformed Abiy, a former lieutenant colonel in the military, as fighting reportedly raged on at least three fronts.

On Wednesday, the 2019 Nobel Peace Prize winner said: “I am returning to the office as I have completed the first phase (of the conflict).”

“The struggle isn’t yet finished. We have areas that haven’t been freed. We should offer a long-lasting solution to make sure the enemy that has tested us doesn’t become a danger to Ethiopia again,” he warned in a statement published on social media.

In recent days, the government has announced the recapture of several small towns, including the UNESCO World Heritage site of Lalibela which is famed for its 12th-century rock-hewn churches.

The TPLF has dismissed the government’s claims, saying the rebels were making strategic withdrawals and remained undefeated.

Fears of a rebel march on Addis Ababa have prompted countries such as the United States, France, and Britain to urge their citizens to leave Ethiopia as soon as possible, although Abiy’s government says the city is secure.

Olusegun Obasanjo, the African Union’s special envoy for the Horn of Africa, is leading a push to broker a ceasefire, but little progress has been reported so far.

The surging conflict has fuelled fears of a potential spillover into the fragile East African region, with Kenyan President Uhuru Kenyatta last month urging both parties to lay down their arms.

The war erupted in November 2020 when Abiy sent troops into Tigray to topple the TPLF — a move he said came in response to rebel attacks on army camps.

But the rebels mounted a shock comeback, recapturing most of Tigray by the end of June before expanding into the neighbouring regions of Amhara and Afar.

The fighting has killed thousands of people, displaced more than two million and driven hundreds of thousands into famine-like conditions, according to UN estimates. 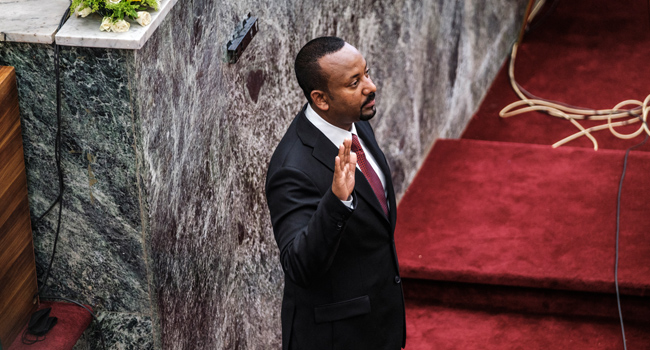 Prime Minister Abiy Ahmed vowed to stand strong and defend “Ethiopia’s honour” despite mounting global criticism over the war in Tigray, as he was sworn in for a new five-year term on Monday.

Abiy’s Prosperity Party scored a landslide win in June elections that federal officials touted as the high-water mark of democratic reforms he initiated upon taking office in 2018.

Yet by the time voters cast their ballots, tens of thousands had been killed in the conflict in the northern Tigray region and hundreds of thousands faced famine-like conditions, according to the UN, tarnishing the 2019 Nobel Peace Prize winner’s once-glowing reputation.

Since then, fighting has spread to neighbouring Afar and Amhara regions while Tigray has fallen under what the UN describes as a de facto humanitarian blockade, spurring fears of a repeat of the mass starvation that turned Ethiopia into a byword for famine in the 1980s.

It is unclear whether Abiy’s swearing-in will alter the course of the war pitting government troops against the Tigray People’s Liberation Front (TPLF) rebel group, which dominated national politics before he took power.

Abiy’s office, which blames the rebels for starting the war last November with attacks on federal army camps, has said certain conciliatory measures such as declassifying the TPLF as a terrorist group can only happen after a new government is formed.

International partners like the United States “will be looking at this closely to see if there is any shift in position”, William Davison, senior Ethiopia analyst for the International Crisis Group, told AFP.

Abiy’s government has faced withering criticism over the conflict, notably from Washington, a longtime ally, with President Joe Biden signing an executive order allowing for sanctions against the warring parties if they fail to commit to a negotiated settlement.

But on Monday, Abiy struck a defiant tone, telling a crowd of tens of thousands in Addis Ababa that “any friendship shouldn’t be at the expense of sacrificing Ethiopia’s honour.”

Relations between Ethiopia and the international community soured further last week when the foreign ministry announced the expulsion of seven senior UN staff, including the local heads of the UN children’s agency UNICEF and its humanitarian coordination office.

“They have been moved from the country to ensure their safety,” Haq said.

A joint statement issued Monday on behalf of more than 40 countries to the UN Human Rights Council expressed shock and dismay over the expulsions and urged a reversal.

“Their work is vital in responding to the multiple humanitarian crises that Ethiopia is facing, and to the continuing reports of human rights violations and abuses,” the statement said, referring to the expelled officials.

Western powers feel “let down” by Abiy, a dynamic that will shape foreign relations during his second term, said Cameron Hudson, senior fellow at the Atlantic Council’s Africa Center.

“The West will likely now revert to a playbook it knows… apply pressure where it can, engage where it must, and keep on the lookout for better alternatives,” Hudson told AFP.

Ethiopian officials accuse the international community of ignoring abuses committed by the TPLF.

Once Abiy’s new government is in place, he will have to confront what Awet Weldemichael, a Horn of Africa security expert at Queen’s University in Canada, called “a trifecta of crises”: the war itself and its humanitarian and economic fallout.

Many analysts expect fighting to pick up now that the rainy season is ending, Awet noted.

“The upcoming wave of fighting and worsening humanitarian conditions are a further hit on his international standing and a test to his new government from day one.”

In his remarks, Abiy reiterated his government’s vow to hold an “inclusive dialogue”, though officials have previously ruled out the participation of TPLF leaders in such a process.

South Sudanese President Salva Kiir said he did not want Ethiopia to experience anything like his own country’s five-year civil war.

“We want everything to be resolved through dialogue and by peaceful means,” he said.

“For all of us on the continent, Ethiopia is our mother. And as we all know, if the mother is not at peace, neither can the family be at peace,” Kenyatta said.

“So my brother, you have a big job in front of you.”