The federal government has directed regulatory agencies in the country to work quickly to address the menace of sub-standard products in the country.

The directive was issued after the Economic Management Team’s meeting, presided by President Goodluck Jonathan at the state house on Tuesday.

Noting that sub-standard products whether manufactured locally or imported could be detrimental to consumers, the Coordinating Minister of the Economy, Dr. Ngozi Okonjo-Iweala, who spoke to journalists after the meeting said the team took presentation from three agencies to address the detrimental effect of sub-standard products and therefore concluded on stamping out the menace.

President Jonathan and the Economic Management Team met for over eight hours to discuss how to support the Standard Organization of Nigeria (SON) in the enforcement of set-down regulations in the control of substandard products.

Dr Okonjo-Iweala, also noted that the government’s decision is about how to protect local manufacturers from unhealthy competition with those who import inferior products.

Commending the National Agency for Food Drug Administration and Control (NAFDAC), the Finance Minister noted that the agency has brought down the prevalence of fake drugs down to 6 per cent from the 16.7 per cent it stood in the past.

In his address, the governor of Adamawa state, Mr Murtala Nyako, said the team was satisfied with the presentations made by the regulatory agencies and suggestions were offered to them to improve on their activities.

Also speaking, the governor of Anambra state, Mr Peter Obi said curtailing sub-standard products and dumping of goods into the country would help in growing the local industries.

The 24 man Economic Management Team was inaugurated by the president in 2011 to generate programmes and policies aimed at achieving government’s transformation agenda. 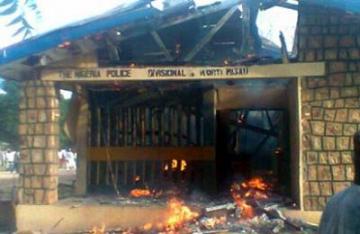 Five policemen have been reportedly killed by unidentified gunmen in Gulak, a town in Madagali local government area of Adamawa state.

The five policemen were attacked at their duty post in the early hours of Friday in Gulak, which is the home town of the special adviser to President Goodluck Jonathan on political matters, Ahmadu Ali Gulak.

Reports from Madagali, a border local government between Adamawa and Borno states indicated that the gunmen numbering about 30, over powered the Madagali Police Divisional headquarters and carted away some arms before setting the station ablaze.

The assailants killed the three policemen on duty.

It was gathered that the unidentified gunmen later attacked two banks in the area where two policemen attached to the banks were also killed during the attack.

Confirming the attacks, police spokesperson, ASP Yoila Nemuel said three policemen were killed in the attack and no arrest has been made as at the time of this report.

According to ASP Nemuel, some policemen were killed in a robbery attempt on First Bank in Gulak, stressing that the bank was the target of the attackers. 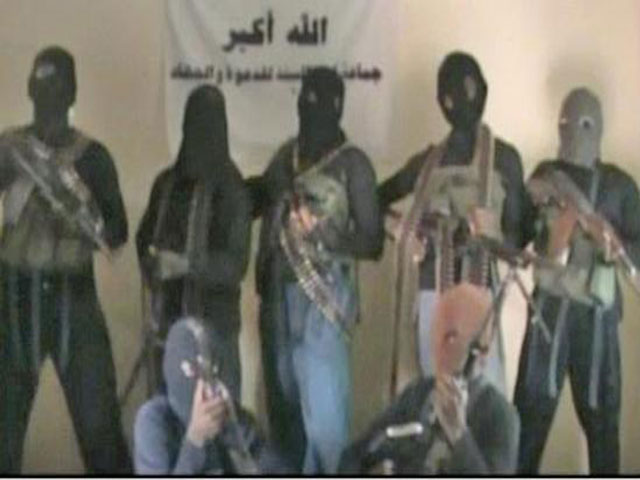 Unidentified gunmen have killed five businessmen and wounded 10 others in Yola, the capital of Adamawa state.

The slain businessmen had gathered to mourn their brother who was gunned down on Sunday night by unknown gunmen and making arrangement on how to accord him a befitting burial when some unidentified gunmen stormed the place of the gathering and opened fire on the mourners, killing five and injuring ten others.

One Simon, a major dealer in assorted beer was allegedly gunned down by unidentified gunmen on Sunday night right in front of his shop behind the PHCN business district office in the heart of the city.

Eye witnesses say friends and relatives of the slain businessman had converged in front of the deceased person’s shop in the state capital to discuss his gruesome murder when all of a sudden two gunmen riding on a motor cycle, stormed the place and opened fire on the mourners.

Adamawa state governor, Murtala Nyako has in reaction to the dastardly act, announced a ban on motorcycle operation within the state capital.

The former President of the Nigeria Labour Congress and chieftain of the People’s Democratic Party (PDP), Comrade Pascal Bafyau, is dead.

Bafyau, reportedly suffered a heart attack in his Abuja residence, at about 10:30pm on Tuesday and passed away on the way to a hospital, a few hours later.

He was rushed to Silver Spring Hospital, but did not make it to the hospital before he gave up.

Doctors at the hospital however tried to jump start his heart but failed to revive him.

Bafyau, who was the leader of the labour group from 1988 to 1994, made a foray into politics on the platform of the Social Democratic Party (SDP).

He was on the verge of emerging as the running mate to late Chief MKO Abiola for 1993 presidential elections, but he was beaten to the contest by Babagana Kingibe, who was chosen by the party.

Bafyau joined the ruling People’s Democratic Party (PDP) at its inception in 1998 and made an unsuccessful bid for senatorial and gubernatorial contests in Adamawa state.

In 1989, Pascal Bafyau, led the NLC to form the Nigerian Labour Party.

He survived by his wife and three daughters.

An Adamawa based group, Pene da Bwatiye, has accused the state government of not being proactive to address the security collapse in the state prior to the recent attack on Sunday,  given security reports and threat to lives by the attackers.

The National President of the association, Prince Hezron A. Fada, at a press

“The security committees of the local governments had met severally and using laid down channels, communicated to the government and all indicators point to the fact that this attack was in the offing. It was the hope that security measures such as the deployment of troops would be taken to forestall the eventuality we witnessed yesterday” he claimed.

12 villages in Lamurde Local Government Area of Adamawa state were ransacked by people suspected to be mercenary cattle rearers, killing a number of people, during the attacks. The attackers were said to have stormed the communities at midnight of Sunday, having crossed River Benue,  entering through Abbare, a border village between Taraba and Adamawa states.

The affected communities are: Bukutu, Luwafuti, Furtu, Wamsa, Suwa Bariki, Sulne, Wurki, Bang, Kullani, Murai, Kiza and Ninge. The Adamawa State Police Command confirmed the incident but only disclosed that five villages were attacked, while six people died as a result of the attack.

ASP Nemuel Yoila said the state Commissioner of Police, Mr. Mark Idakpo, alongside mobile police troops had been dispatched to the crisis-torn areas.

Prince Fada accused the government of complicity saying “regrettably, no such steps were taken and it seemed that government deliberately turned deaf ears and blind eyes to what seemed obvious in surreptitious support of the act seen as a retaliation.”

According to him, the government got wind of the attack since January 2012 but government was not proactive to address the situation. “Governor Murtala Nyako failed to promptly address the situation when the association made a representation to him on the need to forestall the attacks, while security agencies were aware of the security implications to the phenomenon” he stated.

The association also condemned the alleged ineffectiveness of state governor in dealing with the situation, in that no investigation was carried out to arrest the culprits in the first attack and bring them to book, hence a reprisal attack allegedly steamrolled by the governor through connivance with the attackers.

The group also alleged that the use of hired nomadic Fulani mercenaries from the governor’s local government, Mayo Belwa, are waiting to attack Numan and Demsa local government areas and warned they will hold the governor responsible for any further attack on their kin and kith.

However, in a swift reaction, the Adamawa State Government has described the alleged nonchalant attitude of government, as false, baseless and unfounded, as no good government would incite one ethnic group against the other.

Secretary to the state government, Chief Kobis Ari Thimnu, told journalists that the governor, Murtala Nyako, had no right of constitutional mandate to command the military to take control of the situation in Lamurde Local Government as the military received command from their hierarchy in Abuja.

According to him, after the killings at Christ Apostolic Church in Yola, which claimed 11 lives, various security measures were taken by the state government toward avoiding further occurrence.

Reports in Yola reveal that the Officer Commanding the Special Anti- Robbery Squad of the Adamawa State Police Command Yola, ASP Mohammed Ali has been shot by unknown gun men around state lowcost..The police are yet to make an official confirmation of the incident. Security has been beefed up around the Jimeta Metropolis

Mohammed Ali, an assistant superintendent of police (ASP), was on his way to the mosque for the Juma’at prayers when he made a stop at the state low cost to make a purchase when he was shot by his assailants who escaped unchallenged.

An eyewitness told Channels Television that “The men were following him from where he was coming and when he stopped to buy something at the shops around the Police Round About, we heard gunshots and later realized he was the target”.

He also told Channels Television that “Before we could come to our senses we could not find the men again, they used their motor bike to escape”

Mr. Ali was known for being a thorn in the flesh of armed robbers in the state.

The gunmen came on a motor cycle fuelling suspicion the dastardly act was carried out by the dreaded Islamist sect Boko Haram, as it mirrors their mode of operation.

Mohammed Ali is a notably gallant police officer that was recently offered a letter of commendation by the state commissioner of police.He served as the Chief Security Officer to the former Acting Governor Ahmadu Umaru Fintiri in the transition government that ushered in the new government.

According to agency reports, the police officers at the station had fled in different directions as the gunmen fired shots at their station.
The number of casualties is yet to be confirmed, but the area has been reportedly cordoned by soldiers from the joint task force.