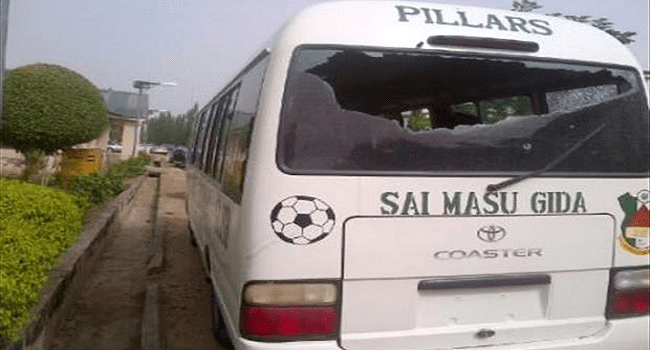 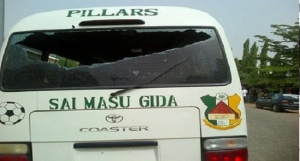 The incident occurred at about 1.15pm Nigerian time on Thursday, March 5th when Kano Pillars were on their way to Owerri for their opening league game against Heartland on Saturday, March 7th.

Kano Pillars’ spokesman Idris Malikawa revealed that the gunmen shot sporadically in a way that left Sai Masu Gida with no escape route.

Malikawa confirmed the injured players are in a Lokoja hospital receiving treatment.

“We were attacked by armed robbers, in which five of our players were injured by the thieves and as I’m talking to you, these five players are now at the Federal Medical Centre in Lokoja and are responding to treatment. The attack happened around 1:15pm and the rest of the team are still in fright following the incident,” Malikawa told Channelstv.com.

Heartland were scheduled to host the champions this Saturday, but the game is now off after the Kano club were attacked by armed robbers along Abaji-Lokoja road on Thursday (March 5th) afternoon.

“The League Management Company has expressed shock at the news of the armed robbery attack on the Kano Pillars Football Club contingent along the Abuja-Lokoja Road and consequently ordered an indefinite postponement of their Match Day 1 fixture in Owerri against Heartland FC,” a statement from the league body said.

The LMC revealed that the other nine matches of Match Day 1 will proceed as scheduled.

Dolphins will play hosts to Kwara United in the early kickoff of the opening day, while Sharks face Sunshine Stars in the second match on Saturday, March 7th.