Senior Special Assistant to the President on Public Affairs, Doyin Okupe on Monday labelled the Adamawa state governor, Murtala Nyako as a politician “of no consequence” in the north eastern state.

Mr Okupe, who appeared as a guest on Channels Television’s flagship breakfast show, Sunrise Daily, was lambasting the G5 governors who defected from the People’s Democratic Party (PDP) to the All Progressives Congress (APC), insisting they are unpopular in their states.

“They (defected governors) are outgoing (as they have served two tenures already). These are governors that are not popular in their states”, he said.

He cited the Governor of Adamawa State, Murtala Nyako as an example, saying “Nyako is of no consequence in Adamawa. We had to beg the whole of Adamawa, Jubril Aminu, Atiku Abubakar, Bamanga Tukur (everybody that was anybody in Adamawa), to help shore up support for Nyako to win the second term” noting that “even at that we only scored 40 per cent”.

He added that it was not the party’s fault but Nyako’s ‘person.’ “It’s not his fault. He’s never been a politician. It was General Obasanjo (Rtd) who went and called him from his farm. He didn’t take part in any primary. He didn’t win any election. He didn’t campaign to anybody.”

“Obasanjo just called him and said you are the governor.”

Governor Murtala Nyako of Adamawa state is one of five governors who defected from the PDP to the APC.

Others are Rabiu Kwankwaso of Kano state, Rotimi Amaechi of Rivers state, Aliyu Wamakko of Sokoto state and Abdulfatah Ahmed of Kwara state. 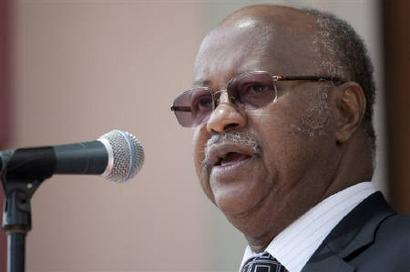 A senior diplomat in Guinea-Bissau says the military has taken over the central district of the capital and there are reports of heavy arms fire including mortar shelling.

The diplomat who could not be named because he was not authorized to speak to the media said Thursday the whereabouts of the country’s interim president and prime minister are unknown.

“There is some trouble. We don’t know what it is. There is shooting, sporadic machine gun fire and there have been three loud bangs … We hear it is coming from near Carlos Gomes Junior’s house,” a diplomat in the capital Bissau told Reuters.

Guinea-Bissau has weathered successive coups and attempted coups since winning independence from Portugal in 1974. The country was due to hold a runoff election on April 29, pitting Prime Minister Carlos Gomes Jr. against a former president, Kumba Yala.

Yala recently announced that he planned to boycott the vote. The emergency election is being held after the death of former leader Malam Bacai Sanha, who died in January after being rushed to Paris for treatment for end-stage diabetes.