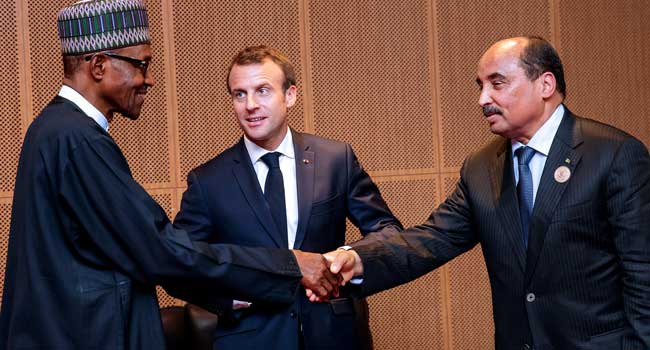 President Muhammadu Buhari on Monday met with the President of France, Emmanuel Macron during the closing ceremony of the 31st Session of Africa Union (AU) in Nouakchott, Mauritania.

Macron is set to visit Nigeria tomorrow, Tuesday and hold talks with President Buhari on security and terrorism. 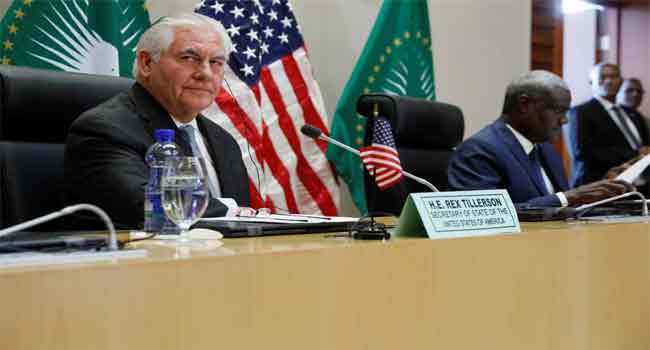 Washington’s top diplomat began his first Africa tour Thursday by meeting with the African Union chief, who said the continent had moved on from a reported insult by President Donald Trump.

Secretary of State Rex Tillerson and AU commission chairman Moussa Faki Mahamat discussed security and counter-terrorism, trade and development, corruption and conflict in an hour-long meeting at the continental body’s headquarters in the Ethiopian capital.

But looming over the meeting was Trump’s alleged description of African nations as “shithole countries” in January, which forced the president to pen a letter reaffirming his commitment to the continent.

Faki, however, insisted the slur was now in the past.

“I received a letter written by President Trump to myself and I shared that with other African leaders. I believe this incident is of the past,” he said.

Tillerson’s five-nation Africa tour — to include Djibouti, Kenya, Chad and Nigeria, all key allies in fighting Islamic extremism — has been described as a “listening tour”, with no deals or initiatives due to be announced.

“The purpose of my trip is to listen to what the priorities of the countries here on the continent are and see where there is good alignment,” said Tillerson.

Tillerson urged Ethiopia to move on from a state of emergency “as quickly as possible” and called for citizens in the tightly-run country to be given “greater freedoms”.

Analysts highlight the choice of countries visited by Tillerson as a sign of the United States’ focus on security issues on the continent.

Chad, Kenya and Nigeria are all battling Islamic extremism, with help from the United States, while Djibouti hosts the only permanent US military base on the continent.

Tillerson and Faki discussed continued US support to African counter-terrorism forces in the Sahel and Somalia but no new concrete commitments were given.

“We have not yet won that battle in Somalia and we must stay at it,” Tillerson said.

His visit is also a bid to counter the mounting perception that the continent is a low priority for the Trump administration, with US-Africa policy ill-defined and key ambassadorial and State Department posts unfilled.

Tillerson’s department, meanwhile, submitted a 2019 budget request that would cut US health programs in Africa by a fifth and diplomatic programs by more than a third.

However he said his visit was “an indication of the importance the continent plays in the future of the US, both in security and from the economic standpoint.”

Also looming over the journey is the rise of China as an economic and diplomatic power to rival the West.

He said the US was “not in any way attempting to keep Chinese investment dollars out of Africa” but urged governments to “carefully consider the terms of those investments” so they do “not forfeit any elements of your sovereignty”.

He also solicited African support in pressuring North Korea to give up its nuclear weapons.

Tillerson said the US was “a long way from negotiations” with North Korea, which this week made a shock offer to discuss denuclearisation in return for security guarantees.

Tillerson’s trip to Ethiopia is scheduled to briefly overlap with a visit by Russian Foreign Minister Sergei Lavrov, who said he had requested a meeting. Washington denied receiving an invitation to talks.

“We sent proposals to the Americans and they said they will think about that but later. As you know, they announced that there will be no meeting and that no discussions (about it) have taken place at all,” Lavrov said in Zimbabwe.

Tillerson, in Addis Ababa, called the idea that he had rejected a meeting with Lavrov “silly.”

“If it doesn’t work out here, he and I see each other often around the world and we have each other’s telephone numbers and we do use them.”

Tillerson heads to Djibouti and Kenya on Friday. 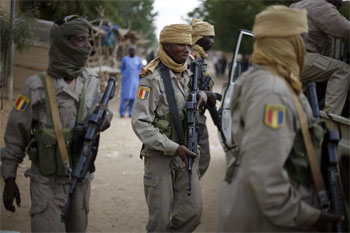 [highlight]Chad, one of the countries involved in the recent peacekeeping mission in Mali, has started to pull out its troops from the country.[/highlight]

This comes after three Chadian soldiers were killed in a suicide attack in Mali on Friday.

However, chad president idriss Deby said his army does not have the skills to fight a shadowy, guerrilla-style of war.

Soldiers from Chad, France and other African countries have ousted Islamist militants from northern Mali’s towns since the invasion, but fighting continues in some remote parts of the Sahara Desert.

Chad’s 2,000 troops were seen as playing a crucial role in the fight because of their experience in desert warfare.

140 officers of the Nigerian Police Force have arrived in Mogadishu, the capital of Somalia to participate in the ongoing Africa Union (AU) Mission in Somalia (AMISOM) peacekeeping operations.

A statement by the Peace and Security Department of the AU Commission on Wednesday said that the Formed Police Unit (FPU) from Nigeria would join other unit from Uganda who were already in Mogadishu.

The Special Representative of the AU Chairperson for Somalia, Boubacar Diarra in a statement said the arrival of the second AMISOM Formed Police Unit was a clear demonstration of the AU’s commitment to support Somalia in its endeavour to improve the security situation in the country especially in the liberated areas.

Mr Diarra thanked the AU Commission, the government and the people of Nigeria for honouring the pledge to provide additional police personnel to the mission.

He said that the deployment of the unit would provide the needed support to the people of Somalia as they strive to improve on the security situation in the country.

“Nigeria already has some Police Officers in Somalia and the deployment of this unit, clearly demonstrated its strong commitment to peace and stability not only in Somalia but also in the other part of the continent,’’ Mr Diarra said.

The statement said that the two units provided by Uganda and Nigeria, would ensure improved security in the liberated areas in the effort to boost Public Order Management, VIP escorts activities and providing protection to camps for Internally Displaced Persons
(IDP).

The units would also train some members of the Somalia Police Force who would eventually take over the policing of their country.