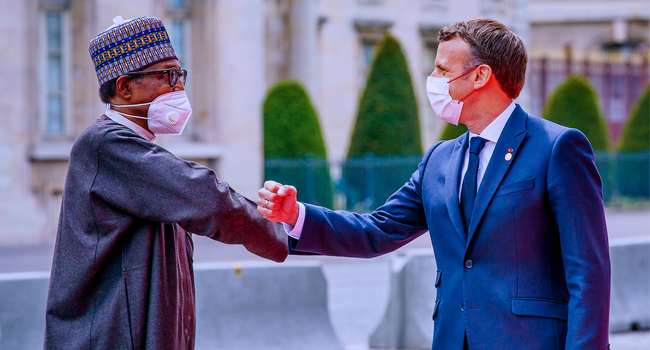 President Muhammadu Buhari on Tuesday said France and Nigeria should deepen anti-terror cooperation to fight groups such as Boko Haram.

He made the remark in an article published in a leading Paris-based magazine, Le Point.

The President is currently in Paris to attend the African Finance Summit hosted by French President, Emmanuel Macron.

“Now Nigeria and France should deepen our anti-terror cooperations if we are to overcome this scourge – particularly in the aftermath of the murder of the late President of Chad,” President Buhari said.

“We must be agile and flexible, cooperating across our borders to cut the head off their groups.”

POST-COVID-19 PANDEMIC, NIGERIA AND FRANCE MUST SEIZE THE CHANCE TO STRENGTHEN MILITARY AND ECONOMIC TIES.

Today, leaders from across Africa meet in Paris to discuss plans to recover from the impact of a common enemy – COVID-19. But for African nations from across the Sahel region and beyond, the issues are inseparable from the fight against another common enemy which is terrorism. And like the war against the Coronavirus, it is one we are fully united with France in our strong determination to overcome.

Across the world, conflict and Coronavirus have not been far apart. As governments have struggled to contain COVID, jihadists have taken advantage in the Sahel – the vast arid stretch of territory that lies between the Sahara and Sub-Saharan Africa. Terrorist incidents have become tragically common across Mali, Burkina Faso and Niger. Around the Lake Chad Basin, Boko Haram terrorism have taken advantage of the pandemic and pushed back into my country Nigeria, whilst still launching raids and attacks in Chad, Cameroon, and Niger.

We have seen more than once how Boko Haram – which in French means “l’éducation occidentale est un péché” – can regroup, morphing in form and tactics. A matter of only a few years ago, they were reduced to a territory-less group, where once they had controlled an area in Nigeria three times the size of Lebanon. It has demonstrated why pushing against one front can prove futile if groups can simply migrate to ponds of insecurity across porous borders. Yet as instability has spread, so the networks that sustain it have strengthened – whether that be weapons supply chains from Libya, ideological imports of Al-Qaeda and ISIS from the Middle East, or trafficking networks that take money from those escaping instability and feeds it back into the system that generates it.

Meanwhile the infection is spreading further afield and reaching into the heart of Europe and France is not being spared the malignant, with innocents murdered on its streets. In that context, our fate is linked. Hence Paris has been active in this common fight. The French Operation Barkhane has provided critical boots on the ground in shoring up security across our region. Though challenges remain, it has ensured a wide expanse of territory has not descended into lawless playground where terrorists masquerading as fighting for Islam groups can freely flourish and multiply. That assistance has been profoundly appreciated in the region.

Now Nigeria and France should deepen our anti-terror cooperations if we are to overcome this scourge – particularly in the aftermath of the murder of the late President of Chad. Where for historical ties, support came to Nigeria from the UK, and to the G5 from France, the terrorists do not recognise these border-aligned distinctions. We must be agile and flexible, cooperating cross our borders to cut the head off their groups.

Indeed, we have already done much to strengthen our bond. Intelligence sharing is well developed, along with training against improvised explosives. But there is more we can do in cross-border military exercises and coordinating strategy. At the same time, we know France has borne much of the strain for combating terrorism of the region, and we – the leaders of Sahel countries – must also do more to present a unified front to lobby other Western nations, particularly Great Britain and the United States and the European Union for further military and humanitarian assistance.

However, we know that military gains do not provide the whole solution. Without security, economic opportunity remains fragile. Without economic opportunity, the propensity for conflict grows. The solution must therefore be two pronged. If we do improve those conditions, it leaves our people vulnerable to indoctrination, as one is vulnerable to COVID-19 without a vaccine.

In the Sahel, crises converge. Traditionally, this vast arid land has been poorer than its Mediterranean neighbours to the north and fertile land to its South. Now, climate change and environmental degradation squeeze the region of water sources, draining opportunity and increasing competition amongst various groups for scarce resources. The fallout from Libya has flushed the whole region with weapons, making any disputes and competition far more destructive. And it is upon these conditions, the lies and propaganda of terrorists who falsely claim to be Islamists promising salvation can find an audience. Islam is a religion of peace.

To counteract these, we must focus on initiatives that sustainably spread opportunity far and wide across the Sahel. Transport links across the Sahel have become dilapidated, much of it still the remnants of the colonial era. For the region’s burgeoning young population, reinvigorating these links or building anew is critical. It allows for efficient allocation of labour; the movement of inputs such as seed, fertiliser or equipment to the areas that need it; and freight to take produce or extractives to market or value-add factories.

Now, as the world emerges from the pandemic, we have the chance to build back better. Though we always knew it, COVID-19 underlined how interconnected and interdependent the world is. With that shattering reminder, we can create a world with that idea at its forefront – one that provides security and opportunity for both of us. 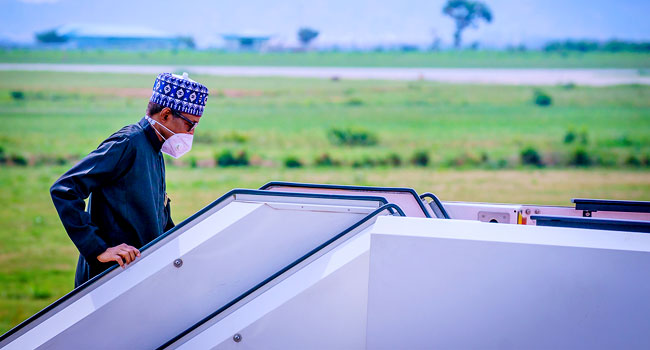 The summit will focus on reviewing the African economy, following shocks from the COVID-19 pandemic, and getting relief, especially from increased debt burden on countries, said Bashir Ahmad, who is an aide to the President.

Ahmad, the Personal Assistant to the President on New Media, announced the Nigerian leader’s departure from the country in a tweet on Sunday.

President @MBuhari has departed Abuja for Paris, France ahead of the African Finance Summit which will be focused on reviewing African economy, following shocks from COVID-19 pandemic, and getting relief, especially from increased debt burden on countries. #PMBinParis pic.twitter.com/Th0nWWuclV

The Senior Special Assistant to the President on Media and Publicity, Garba Shehu, had announced that President Buhari would be travelling to France in a statement on Saturday.

According to him, the summit which will last four days will be hosted by French President, Emmanuel Macron.

It is expected to draw major stakeholders in the global financial institutions and some heads of government, who will collectively discuss external funding and debt treatment for Africa and private sector reforms.

While on the trip, Shehu said President Buhari would meet with the French President to discuss growing security threats in the Sahel and Lake Chad region.

Both leaders are also expected to discuss political relations, economic ties, climate change, and partnership in buoying the health sector, particularly in checking the spread of COVID-19 with more research and vaccines.

“Before returning to Nigeria, President Buhari will receive some key players in the oil and gas sector, engineering and telecommunications, European Council and European Union Representative for Foreign and Security Policy and Commission, and members of the Nigerian community,” the statement had said.

The President was accompanied on the trip by the Minister of Foreign Affairs, Geoffrey Onyeama; Minister of Finance, Budget and National Planning, Zainab Ahmed; Minister of Trade and Investment, Adeniyi Adebayo; and Minister of Health, Dr Osagie Ehanire.

Others were the National Security Adviser, Babagana Monguno, and the Director-General of the National Intelligence Agency (NIA), Ahmed Rufai.