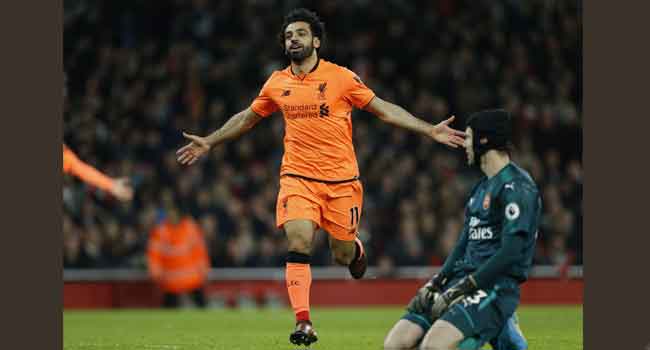 Mohamed Salah was the star African performer in Europe at the weekend, netting twice to close within one goal of Harry Kane in the English Premier League leading scorer race.

The Egypt sharpshooter and 2017 African Footballer of the Year twice gave Liverpool the lead in a dramatic 2-2 draw with Tottenham Hotspur, whose second equaliser came from Kane.

Gabon striker Pierre-Emerick Aubameyang — third behind Salah and Senegalese Sadio Mane in the Footballer of the Year poll — scored on his debut as Arsenal triumphed 5-1 against Everton.

The Egypt winger struck twice, including a stoppage-time goal, but Liverpool were denied as Tottenham rescued a 2-2 draw at Anfield. Salah punished a mistake from defender Eric Dier to put Liverpool ahead with a cool finish in the third minute. He restored Liverpool’s lead with a superb solo effort — his 21st league goal this term.

He marked his Arsenal debut with a goal in the Gunners’ 5-1 demolition of Everton at the Emirates Stadium. Aubameyang joined Arsenal from Borussia Dortmund for a club record £56 million (about $79.1 million/63.5 million euros) last week and didn’t waste time making a good impression on his new fans. He capped a lively performance by scoring Arsenal’s fourth goal with a cool finish late in the first half, although replays showed he was fortunate not to be flagged offside.

The Ivory Coast striker has been ruled out for the rest of the season after suffering a serious injury in a 1-1 draw at Leicester. Former Manchester City star Bony tore a cruciate ligament in his knee after coming on as a second-half substitute.

The Egypt defender scored his first goal since August, but it wasn’t enough to boost his side’s hopes of avoiding relegation as they lost 3-2 at home to Southampton. Hegazi put Albion in front with a fourth-minute header from Chris Brunt’s cross.

Wanyama set up a dramatic finish at Anfield with an incredible 25-yard piledriver into the top corner for Tottenham’s first equaliser 10 minutes from time. The Kenyan had been on the pitch only a minute before smashing home his first goal of an injury-plagued season.

Algerian Mahrez was again absent from the Leicester squad in a 1-1 draw against Swansea after his displeasure at the Foxes’ refusal to let him move to runaway league leaders Manchester City last week.

Senegalese midfielder Diame headed home his second goal of the season to earn Newcastle a 1-1 draw at Crystal Palace to lie just a point above the relegation zone.

The 21-year-old Ghanaian marked only his fourth La Liga start with his first goal in the Spanish top flight against floundering champions Real Madrid. Boateng latched onto a loose ball to coolly slot in Levante’s first equaliser of a 2-2 draw and cap an enterprising individual display.

Bottom club Benevento were awarded a penalty for Senegalese defender Koulibaly’s clumsy tackle only for it to be revoked by VAR (video assistant referee) due to an earlier offside position. Napoli won 2-0 to stay top of the Serie A table.

Ghanaian Acquah equalised and was sent off as Torino settled for a 1-1 draw against European qualification rivals Sampdoria. Acquah levelled in the 25th minute before being red-carded for a second bookable offence after 75 minutes. Senegalese Niang missed a chance to pull Torino ahead three minutes after Acquah’s goal, but his lob was off target. He was substituted to his obvious displeasure and Nigerian Obi went off injured.

Once again, the Ivory Coast veteran rescued a point for Hertha when he headed home a second-half equaliser for his eighth Bundesliga goal of the season in a 1-1 draw against Hoffenheim. It was the fourth time this season that Kalou, 32, pulled Berlin level after also netting in draws against Bayern Munich, Freiburg and Augsburg.

The Senegal international endured a night of contrasting emotions as Monaco came from two goals down to beat Lyon 3-2. Balde used his strength to hold off a series of defenders and drill in a low strike to cut the deficit on 31 minutes that helped spark his side’s recovery. But his role in the fightback ended prematurely as he was sent off for a second yellow card shortly before half-time for a wild challenge on Ferland Mendy, having been booked minutes earlier for kicking the ball away in frustration. 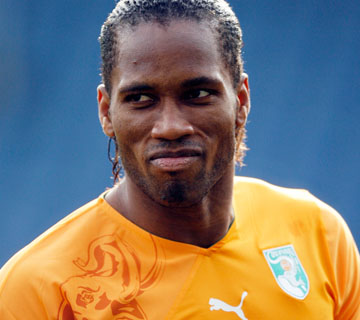 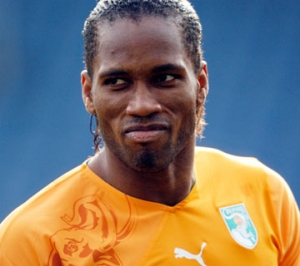