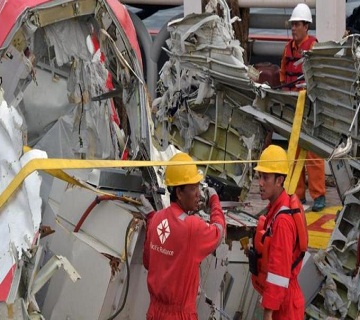 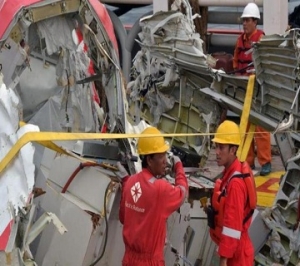 Indonesian divers pulled out the cockpit voice recorder from the sunken wreckage of an AirAsia passenger jet on Tuesday, a key step towards determining the cause of the crash that killed all 162 people aboard.

The cockpit voice recorder, which retains the last two hours of conversation between the pilots and air traffic controllers, was found close to where the flight data recorder was recovered from the bottom of the Java Sea on Monday.

“Today we have completed searching for the main things that we have been looking for,” Rear Admiral Widodo, the commander of the navy’s western fleet, told reporters after handing over the cockpit voice recorder to investigators on Tuesday.

“But the team will still try to find the body of the plane in case there are still bodies inside.”

Together the black boxes, which are actually orange, contain a wealth of data that will be crucial for investigators piecing together the sequence of events that led to the Airbus A320-200 plunging into the sea.

The cockpit voice recorder is expected to be sent to the capital, Jakarta, for analysis.

A total of 48 bodies have so far been recovered from the sea, some of them still strapped into seats. But that leaves more than 100 missing.

The overwhelming majority of the people on Flight QZ8501 were Indonesian. There were also citizens of Britain, France, Malaysia, Singapore and South Korea.

Government officials sought to reassure victims’ families that divers would continue to search for bodies.

“Our main task is to find the victims,” Fransiskus Bambang Soelistyo, head of the National Search and Rescue Agency, told reporters in Jakarta before heading to Surabaya to meet families of the victims.

“Even if both (black boxes) are found, it doesn’t mean that our operation is over.”

Relatives of the victims urged authorities to continue to search for the remains of their loved ones.

“Even if the search has to last for a month, we are still hoping to find them,” said Lioni, who lost four family members in the plane crash. “If they can find even one (of my family members), we would feel a little bit relieved.” 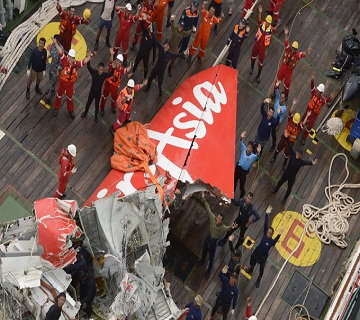 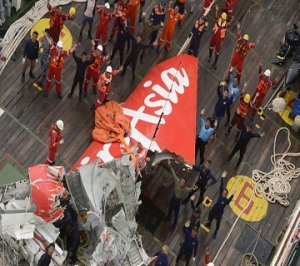 Indonesian navy divers on Monday retrieved the black box flight data recorder from an AirAsia airliner that crashed two weeks ago, killing all 162 people on board, a government official said.

Divers found the flight data recorder under the wreckage of one of the plane’s wings, said Bambang Soelistyo, the head of Indonesia’s search and rescue agency.

“We succeeded in lifting the part of the black box known as the flight data recorder,” Soelistyo, told reporters at a news conference on Monday.

The second black box with the cockpit voice recorder has been located, based on pings from its emergency transmitter, but not yet retrieved, Madjono Siswosuwarno, the main investigator at the National Transportation Safety Committee, told Reuters.

Officials hope the black boxes, found near the wrecked wing of the plane, will reveal the cause of the crash. The national weather bureau has said seasonal storms were likely a factor.

The two devices, known popularly as black boxes, are seen as crucial to unraveling the mystery of what brought down Flight QZ8501 as it flew toward Singapore from the Indonesian city of Surabaya with 162 people on board.

The recorders are expected to be taken to the capital, Jakarta, for analysis and it could take up to a month to get a complete reading of the data. Officials did not provide details of the condition of the black boxes.

“The download is easy, probably one day. But the reading is more difficult … could take two weeks to one month,” Siswosuwarno said.

While the cause of the crash is unknown, the disaster has once again placed Indonesia’s chaotic aviation industry under scrutiny.

Indonesian officials have alleged Indonesia AirAsia did not have a licence to fly the route on the day of the crash, although the airline rejects the claim. 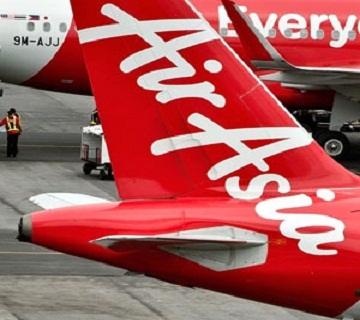 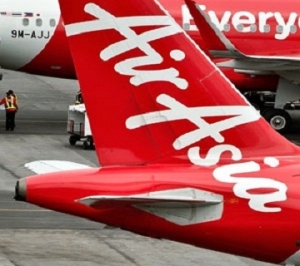 The tail of AirAsia flight QZ8501 has been found, potentially making it a major step towards locating the plane’s black boxes and helping shed light on what caused it to crash into the sea 11 days ago.

It was found in a secondary search area, lending weight to theories that strong currents have moved the debris.

Flight QZ8501 vanished from radar screens over the northern Java Sea on Dec. 28, less than half-way into a two-hour flight from Indonesia’s second-biggest city of Surabaya to Singapore. There were no survivors among the 162 people on board.

“We’ve found the tail that has been our main target,” Fransiskus Bambang Soelistyo, head of the search and rescue agency, told a news conference in Jakarta.

The tail was identified by divers after it was spotted by an underwater machine using a sonar scan, Soelistyo said.

He displayed underwater photographs showing partial lettering on the sunken object compared with a picture of an intact Airbus A320-200 in AirAsia livery.

“I can confirm that what we found was the tail part from the pictures,” he said, adding that the team “now is still desperately trying to locate the black box”.

Dark and shallow waters at the site have made it difficult for divers to retrieve the wreckage age,Erik van Sebille, an oceanographer at the University of New South Wales in Sydney, Australia, told the Associated Press news agency.

Despite a huge recovery operation assisted by several countries, progress has been hampered by strong winds and high waves.
So far only 40 bodies have been found, all of them floating on the sea.

It is not clear what caused the crash, but bad weather is believed to be a contributing factor. 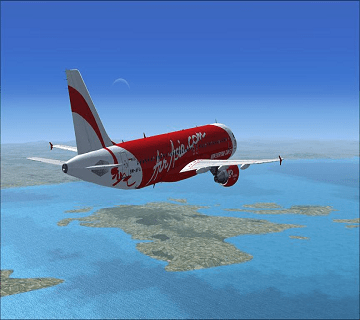 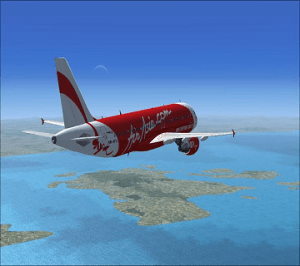 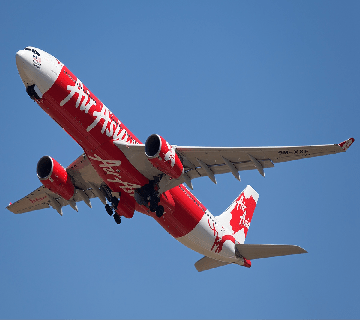 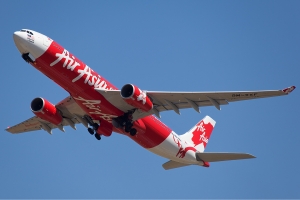 An AirAsia plane plane carrying 162 people on Sunday went missing in Southeast Asia following the pilots’ request to change to a higher altitude to “avoid clouds”, during a flight from the Indonesian city of Surabaya to Singapore.

The craft had on board 155 passengers and seven crew on board. Indonesia AirAsia said 156 were Indonesian, with three from South Korea and one each from Singapore, Malaysia and France.

However, the United Kingdom Foreign Office has also noted that a British national was aboard the plane and that the next of kin have been informed.

“The aircraft was on the submitted flight plan route and was requesting deviation due to enroute weather before communication with the aircraft was lost,” the airline said in a statement.

The search has begun for the flight as both neighboring Singapore and Malaysiahave offered to help in the process.

However, there are reports an aircraft crashed east of Belitung Island, Indonesia, but it is not confirmed to be the missing #QZ8501, according to local media.