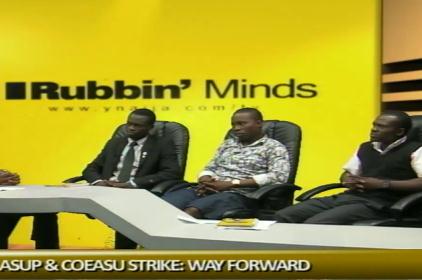 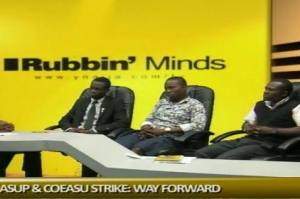 The Student Union Government Presidents of two Lagos based polytechnics, YABATECH and LASPOTECH, Babajide Salvado and Abdulkareem Yusuf, have explained why the students are in support of the strike by the Academic Staff Union of Polytechnics (ASUP).

The student leaders were guests on Channels Television youth programme, Rubbin’ Minds, where they explained that majority of the points for which their lecturers are agitating affect the students directly.

Mr Salvado of Yaba College of Technology (YABATECH) decried the imbalance in the manner in which the Nigerian Government and the media gave more attention to the Academic Staff Union of Universities (ASUU) during their 5-month strike in 2013, failing to give same to the Polytechnic lecturers since their struggles started in January 2014.

He also laid emphasis on the bureaucratic bottlenecks that had bedevilled the growth and development of polytechnic education for many years.

He noted that the students belief that the Polytechnic lecturers’ demands were genuine. Although he admitted that emphasis had been laid on the lecturers’ monetary demands as it concerns the payment of their arrears.

There had been arguments in many quarters that the entry requirements of students into the universities have always been higher than what obtains in the other institutions with lower cut-off marks and as such their products could not be at par.

The student leaders unanimously condemned the view. Yusuf claimed that many Polytechnic students scored as high as the university cut-off marks and still were not offered admission into a university due to factors beyond them. Citing his school, the Lagos State Polytechnic as example, he noted that Nigerian polytechnics can boast of many intelligent products who would comfortably compete with university graduates.

Salvado also added that the students were ready to have the cut-off mark for all tertiary institutions set at parity if the discrepancies would be the basis for considering polytechnics as inferior to universities, as he was also sure that they had the technical edge in their competencies.

The Student Union Government President of the Federal College of Education, Akoka, Olusola Ogunnowo, whose lecturers under the aegis of Colleges of Education Academic Staff Union, COEASU, have also been part of the industrial action, added that the reforms in the education sector have shown that being a teacher would no more be seen as an alternative career.

He revealed that many of his colleagues were in school not as a way out of having failed to make it into other institutions but as a form of fulfilment of their dreams to be teachers. He added that there were graduates of universities who were back in their schools in order to get certification for their dream to become lecturers, a process he claimed showed the seriousness and importance of the Colleges of Education.

The over 6 months old strike had been experiencing challenges with some schools in different parts of the country pulling out; a development that the student leaders condemned. They claimed that the disunity among the ASUP and COEASU was a product of selfishness and pursuit of personal interests.

Salvado also had tough words for the national leadership of the National Association Nigerian Students (NANS) for having failed to make a statement in solidarity with the plight of the students and their lecturers in the polytechnics and colleges of education.

He noted that the President of the NANS had been at the National Conference supposedly to represent the youth and there has been no mention of how to develop Nigerian education since the conference started.

They called on the Nigerian Government to change its attitude towards education, especially the polytechnics and colleges of education.