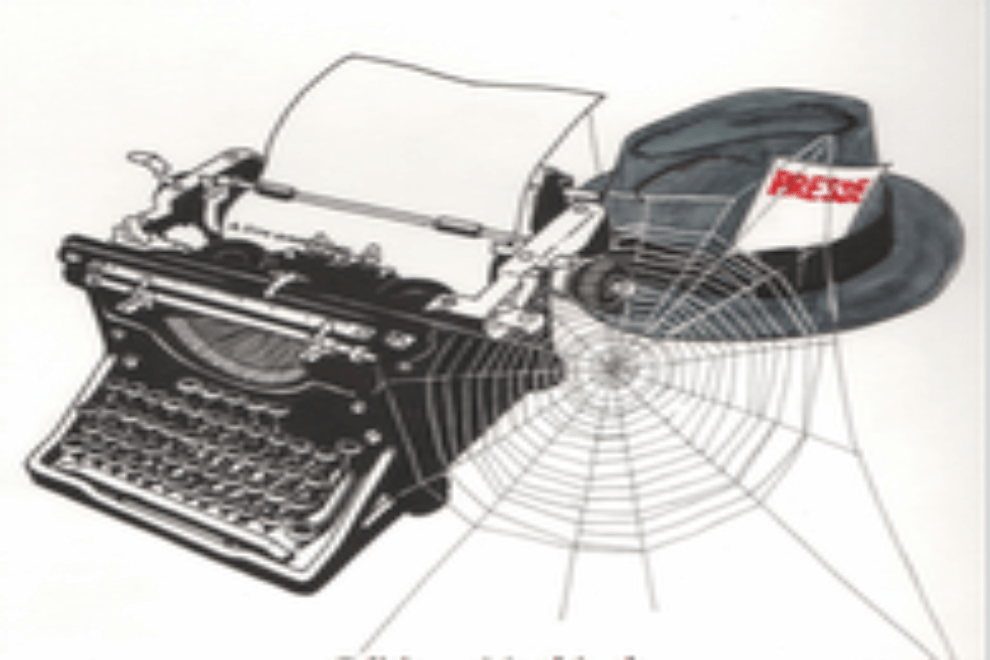 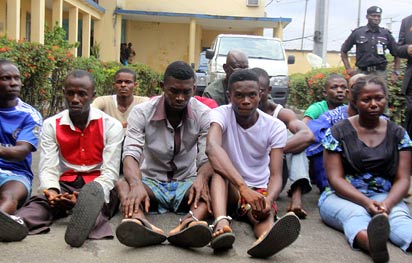 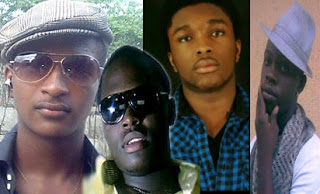 The Police in Rivers State said they have arrested the  mastermind and prime suspect of the ALUU murder, Coxson Lerebori Lucky, aka Bright.

He allegedly raised the alarm which got the students killed.

21 people have so far been arrested and the IG of police has ordered an inquest into the alleged involvement of police men and have promised to bring to book any officer found involved in the killing. 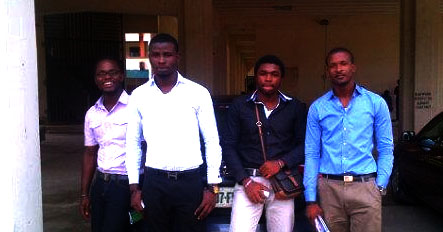 Police officers were chased away with stones by the mob that attacked and killed the four students of the University of Port Harcourt, in Aluu, Rivers state, the Inspector General of Police (IGP), Mohammed Abubakar has revealed.

The IGP in a statement issued on Monday in Abuja, explained that the chasing away of the police officers was why the police failed to save the four students who were gruesomely killed by the mob in Aluu.

The Police boss explained that his men were chased away with stones by the mob attacking the boys. He said when a reinforced team of policemen returned to the scene, the boys had been killed and burnt by the mob.

“On 5th October, 2012 at about 0700Hrs, based on a distress call that some armed robbers were arrested at Omukiri-Aluu area in Ikwerre LGA, a patrol team of four Policemen from Isiokpo Divisional Police Headquarters was dispatched to the area, a distance of about 10kms. The Police on getting to the scene met a mob attack on four victims who were supposedly the suspected armed robbers. Attempt made by the Police Patrol Team to take over the suspects were met with stiff opposition from the mob who chased the team with stones” the statement read.

“Consequently, the Patrol Team called for reinforcements, but unfortunately, upon the arrival of the reinforcements, the alleged armed robbery suspects have been stoned and burnt to death, while the mob immediately took to their heels.”

“The corpses were recovered by the Police who by then have been joined by members of the Joint Task Force (JTF)” the statement added.

The Inspector General’s statements confirmed criticisms by witnesses that the police simply abandoned the students to their fate when they got to the scene of lynching.

A relation of one of the victims actually accused the police of encouraging the mob to kill the boys.

Mr Abubakar said the Police immediately launched an investigation leading to the arrest (based on information) of Alhaji Hassan Welewa, the Traditional Ruler of Omukiri Community, Aluu where the heinous incident took place and 18 others, some of whom are members of the vigilante group of the community.

According to the police “intelligence report implicated Alhaji Hassan Welewa, as being the person who incited the mob to unleash terror on the victims.”

Explaining the reason that lead to the boys visit to Aluu, the statement revealed that “the victims had gone to the area where they met their unfortunate death earlier that morning to demand for money allegedly owed to them by Coxson Lelebori Lucky, alias ‘Bright’, who raised a false alarm that the victims were armed robbers.”

“Although, Coxson has gone underground, Detectives are on his trail” the statement added.

Abubakar said the police have in the meantime made a  massive deployment of Policemen  to the area, including detectives to assist the State Police Command, adding that “investigation is ongoing with efforts being intensified to track down others who are involved in the incident. Those who are found culpable shall be prosecuted.”

“Normalcy has been restored in the area, while the situation in the area, especially in the University and other tertiary institutions are being closely monitored with a view to forestalling any untoward reactions.

“Efforts are being intensified to establish the motive(s) behind this crime, arrest all who may be directly or indirectly connected with the crime and eventually bring all indicted persons to book.”

“I wish to use this medium to advice and appeal to Nigerians to see it as their civic obligation in the fight against crime and criminality, to assist security agencies in the discharge of their responsibility. Security is everybody’s responsibility and so, should not be abandoned in the hands of security agencies alone. The maximum cooperation of the public is needed to ensure that Nigeria is safe for all” the Police boss appealed to all Nigerians.

He called on Nigerians to discourage the vigilante mentality saying “Nigerians are further reminded to avoid taking laws into their hands, as two wrongs can never make a right.  More so, it is criminal and against the laws of the land and those that do so will surely be made to face the full wrath of the law.”

The IGP also appealed to citizens who might have information touching on this and other on-going Police investigation not to hesitate in turning over such information to the Nigeria Police Force. 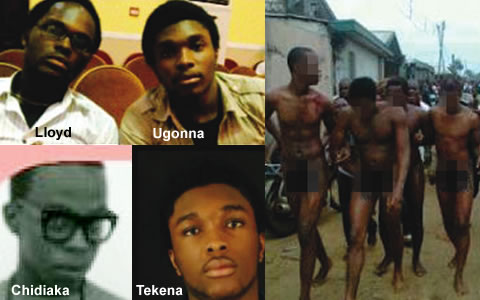 Thirteen persons, including the Chief of the Omokere Aluu community, in River State, have been arrested in connection with the killings of four students of the University of Port Harcourt, who were accused of stealing.

The Nigerian cyber world is currently frenzying over a video allegedly from Omokere Aluu community in Rivers state, showing a mob action that led to beating, killing and burning of four young men, allegedly for stealing.

The gory video which was published on various websites, late Saturday night, showed how the crowd lynched the four naked men who were eventually set ablaze after three of them went unconscious.

The victims of the mob action have been identified as Lloyd, Tekena, Ugonna and Chidiaka. They were said to be students of the University of Port Harcourt.

The Police Public Relations Officer in Rivers state, Mr. Ben Ugwuegbulam, who confirmed the arrest stated that some arrests were made in Aluu, adding that any person found not culpable would be released.

“The Rivers state police command is strongly opposed to such barbaric conduct, and has commenced diligent investigation into the matter,” he said.

He added that the video was forming part of the investigation.

Conflicting reports trail the reason behind the jungle justice meted on the unfortunate victims.

While some said the victims were robbers and stole blackberry phones and laptops, another report said they were on a debt recovery mission before they were mistaken for robbers.

However, Nigerians have taken to different social media platforms to express their outrage at the killings, calling for a quick investigation and arrest of identified members of the mob.