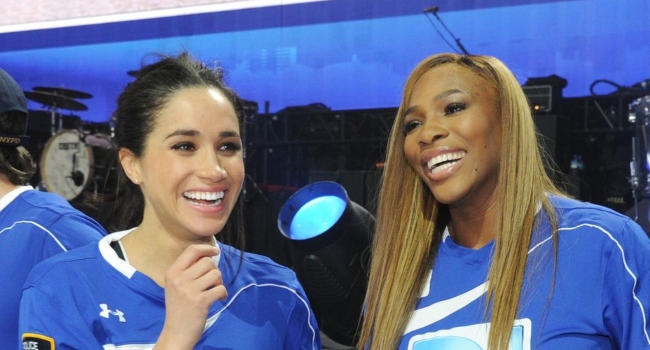 In a two-hour interview with Oprah Winfrey, Markle, whose mother is Black, said her husband Prince Harry revealed his family’s concerns over “how dark” her son Archie’s skin would be.

She also said no members of the royal family had spoken out to defend her against a torrent of what she said was racist coverage from British tabloids.

“Her words illustrate the pain and cruelty she’s experienced,” Williams tweeted after the interview aired on Sunday.

“I know first hand the sexism and racism institutions and the media use to vilify women and people of color to minimize us, to break us down and demonize us,” said Williams, hailing her “selfless friend.”

“We must recognize our obligation to decry malicious, unfounded gossip and tabloid journalism. The mental health consequences of systemic oppression and victimization are devastating, isolating and all too often lethal.”

Markle told Winfrey she had contemplated taking her own life after joining the royal family and that she was denied help during her mental health crisis.

“Royalty is not a shield from the devastation and despair of racism,” Bernice King, daughter of civil rights leader Martin Luther King Jr., tweeted in support.

“We can know racism exists in an institution and still hurt for someone who was hurt by it,” she wrote.

African American poet Gorman, who became a star after her reading at President Joe Biden’s inauguration, said the British royal family had missed an opportunity to change.

“Meghan was the Crown’s greatest opportunity for change, regeneration, and reconciliation in a new era. They didn’t just maltreat her light — they missed out on it,” the 22-year-old Gorman tweeted, referencing Prince Harry’s mother Diana, who was killed in a high-speed car crash in Paris in 1997 as she tried to escape paparazzi.

“Meghan is living the life Diana should have, if only those around her had been as brave as she was. Meghan isn’t living a life without pain, but a life without a prison.

“This isn’t Meghan’s princess ‘happy’ ending. But sometimes change, the decisions that bring us the most hurt, aren’t about happiness, but healing.”

Gorman said it was unclear if it would change the royal family, but Markle would inspire women.

“Think of the women who will be inspired to stand up for their lives, the partners who will be kinder & more courageous than the kin they were born into,” she tweeted.

“She was suicidal and begged for help,” she said, adding a tweet with a quote from Markle after discussing her mental health struggles with Winfrey. 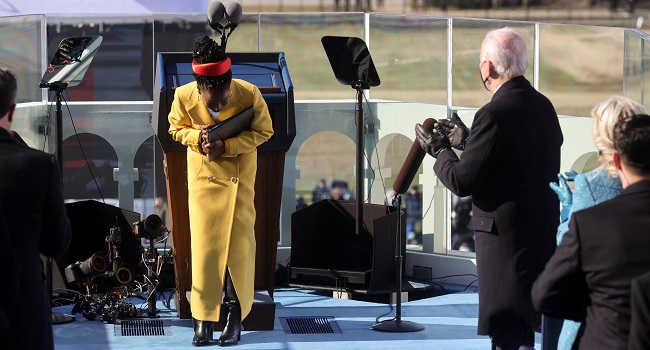 African-American poet Amanda Gorman, who became a star after her reading at President Joe Biden’s inauguration, has said a security guard claimed she looked “suspicious” and followed her as she walked home.

“This is the reality of black girls: One day you’re called an icon, the next day, a threat,” she tweeted Friday.

“He demanded if I lived there because ‘you look suspicious.’ I showed my keys & buzzed myself into my building. He left, no apology,” she wrote.

Gorman, whose Twitter account says she lives in Los Angeles, did not immediately reply to an AFP request for more information.

Gorman became an international sensation after reciting her original work “The Hill We Climb” at the inaugural, a poem inspired by the January 6 attack on the US Capitol.

The 22-year-old Harvard University graduate was invited to perform in Washington after First Lady Jill Biden saw one of her readings.

She was the youngest poet ever to recite at a presidential inauguration, a role first given to Robert Frost by John F. Kennedy in 1961.

In another tweet on Friday, Gorman wrote: “In a sense, he was right. I AM A THREAT: a threat to injustice, to inequality, to ignorance. Anyone who speaks the truth and walks with hope is an obvious and fatal danger to the powers that be.”

Poet Amanda Gorman on Wednesday became a sudden star at age 22 at President Joe Biden’s inauguration as she recited verse inspired by the Capitol attack, touching on how democracy “can never be permanently defeated.”

Gorman was the youngest poet to recite at an inauguration, a role first given to Robert Frost by John F. Kennedy in 1961, after First Lady Jill Biden saw one of Gorman’s readings and invited her to participate at the Capitol steps.

Gorman said that she had been writing a few lines a day but stayed awake at night out of a compulsion to complete her inauguration poem, “The Hill We Climb,” following the January 6 ransacking of the Capitol by supporters of then president Donald Trump who hoped to undo Biden’s victory.

“We’ve seen a force that would shatter our nation rather than share it / Would destroy our country if it meant delaying democracy,” she recited.

“And this effort very nearly succeeded / But while democracy can be periodically delayed, / It can never be permanently defeated.”

Gorman, who graduated from Harvard University last year, was the first to hold the role of national youth poet laureate by the Library of Congress and earlier held a similar honor in Los Angeles, where she has started a non-profit group to promote literacy.

She has previously written about the struggle for racial equality and the #MeToo movement against sexual assault.

Showing both composure and joy as she took the podium moments after Biden, Gorman opened her reading by speaking of how “We the successors of a country and a time where a skinny Black girl descended from slaves and raised by a single mother can dream of becoming president — only to find herself reciting for one.”

Among her previous works, Gorman wrote “Tyrants Fear the Poet” to address the 2017 white supremacist march in Charlottesville, Virginia — an episode that Biden said motivated him to challenge Trump, who had said the crowd included “very fine people on both sides.”

In an interview with National Public Radio, Gorman said that she grew up with a speech impediment in which she could not pronounce certain letters — a trait she shares with Biden, who has been open about his struggles with stuttering.

Her reading triggered loud applause at the inauguration and an avalanche of praise on social media.

“I have never been prouder to see another young woman rise!” tweeted daytime television queen Oprah Winfrey, drawing a parallel to another celebrated writer, the late Maya Angelou, who read at Bill Clinton’s first inauguration.

Joanne Liu, the former president of Doctors Without Borders, called Gorman’s recitation “the most inspiring 5:43 minutes for the longest time.”

Below, a full transcript of Gorman’s poem that has everyone talking.

When day comes, we ask ourselves, where can we find light in this never ending shade?
The loss we carry, a sea.
We must wade.
We’ve braved the belly of the beast.
We’ve learned that quiet isn’t always peace.
And the norms and notions of what just is, isn’t always justice.
And yet the dawn is ours before we knew it.
Somehow we do it.
Somehow we’ve weathered and witnessed a nation that it isn’t broken, but simply unfinished.
We, the successors of a country and the time where a skinny Black girl descended from slaves and raised by a single mother can dream of becoming president only to find herself reciting for one.
And yes, we are far from polished, far from pristine, but that doesn’t mean we are striving to form a union that is perfect.
We are striving to forge our union with purpose.
To compose a country, committed to all cultures, colors, characters, and conditions of man.
And so we lift our gaze, not to what stands between us, but what stands before us
We close the divide because we know to put our future first, we must first put our differences aside.
We lay down our arms so we can reach out our arms to one another. We seek harm to none and harmony for all.
Let the globe, if nothing else say, this is true.
That even as we grieved, we grew.
That even as we hurt, we hoped.
That even as we tired.
We tried that we’ll forever be tied together victorious.
Not because we will never again know defeat, but because we will never again sow division.
Scripture tells us to envision that everyone shall sit under their own vine and fig tree and no one shall make them afraid
If we’re to live up to our own time, then victory won’t lie in the blade, but in all the bridges we’ve made.
That is the promise to glade the hill we climb.
If only we dare it’s because being American is more than a pride we inherit.
It’s the past we step into and how we repair it.

We close the divide because we know to put our future first, we must first put our differences aside

We’ve seen a force that would shatter our nation, rather than share it.
Would destroy our country if it meant delaying democracy.
And this effort very nearly succeeded, but while democracy can be periodically delayed, it can never be permanently defeated in this truth.
In this faith we trust for while we have our eyes on the future, history has its eyes on us.
This is the era of just redemption.
We feared it in its inception.
We did not feel prepared to be the heirs of of such a terrifying hour, but within it, we found the power to author a new chapter.
To offer hope and laughter to ourselves.

We will not be turned around or interrupted by intimidation because we know our inaction and inertia will be the inheritance of the next generation.
Our blunders become their burdens, but one thing is certain.
If we merged mercy with might, and might with right, then love becomes our legacy, and change our children’s birthright.
So let us leave behind a country better than the one.

For there was always light. If only we’re brave enough to see it.