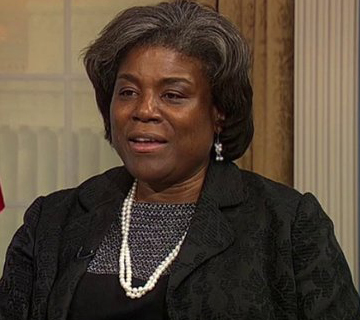 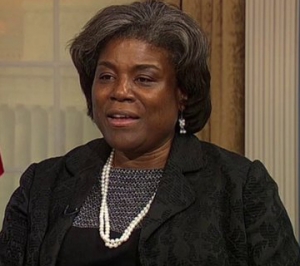 The US Assistant Secretary for African Affairs, Ambassador Linda Thomas Greenfield, has called on Nigeria to assist other West African countries in the containment of the Ebola Virus Disease.

She made the appeal after meeting with the Minister of Health, Prof. Onyebuchi Chukwu, in Abuja on Thursday.

Mrs Thomas-Greenfield who is in Nigeria on official visit to attend a security Nigeria-US Bi-National Commission meeting to discuss issues on health and politics commended “the minister, his staff and the government of Nigeria on how they effectively deal with the Ebola outbreak here in Nigeria.

“They are taking all the right steps to stop this andthey are having great success here. I appeal to the Minister to assist neighbours in Liberia and Sierra-Leone as they also grapple with this terrible outbreak”, she said.

She further expressed concerns “over the spread of the Ebola disease in Liberia, Sierra-Leone and Guinea” adding that “efforts are being made proactively every single day with the support of our Centre for Disease Control (CDC), World Health Organisation (WHO), and the health community around Africa and the world to support those efforts to control the outbreak in those three countries”, she said.

She also denied allegation that U.S was not ready to assist Nigeria, especially with the trial drugs.

“That is not correct; I think the Centre for Disease Control has proactively supported all the countries in the West African region in dealing with the situation. It is not about Zmapp. There were six doses of Zmapp available; they were all used.

“What is important is how to control the spread of the disease. And, that is exactly what is being done here in Nigeria; and efforts are being made to have the same kind of success in Liberia,” the American official stated.

Prof Chukwu on his part said Nigeria is her brother’s keeper, promising that “we are going to assist our sister nations”.

He also commended the efforts of the United States’ Centre for Disease Control in containing the spread of Ebola Virus Disease in Nigeria.

The United States has expressed concern about the worsening security situation in Nigeria despite efforts to resolve the crisis in the north eastern part of the country.

US Assistant Secretary of State for African Affairs, Ambassador Linda Thomas-Greenfield, who gave an address to the regional security working group of the Nigerian-US Bi-National Commission, said the security situation in the North East is “steadily worsening, deeply disturbing and increasingly dangerous with each passing day”.

Ambassador Thomas-Greenfield said security requires engagement by the three tiers of government and the civil society. She also promised that the United States will support Nigeria and its security agencies as they perform those responsibilities.

She further told the gathering that the US is worried about the more than 700,000 internally displaced persons in the North East and reports that the number is increasing, noting that “the frequency and scope of Boko Haram’s terror attacks have grown more acute and constitutes a serious threat to this country’s overall security. Boko Haram has shown that it can operate not only in the North East, but in Kano, Abuja and elsewhere.

We are very troubled by the apparent capture of Bama and the prospects for an attack on Maiduguri, which would impose a tremendous toll on the civilian population”, she said.

She expressed worry that “despite our collective efforts, the situation on the ground is worsening” adding that “Abubakar Shekau’s bold announcement that Boko Haram is now governing a caliphate only adds to the perception that the security situation is steadily worsening”.

She however noted that “in order to combat this trend, President Barrack Obama launched a major security initiative called the Security Governance Initiative during the recent U.S African Leaders Summit to support Nigeria and the region”, in addition to the “technical training to military and police forces engaged in the fight against Boko Haram”.

She further expressed the willingness of the American government to “provide advanced training to a Nigerian Infantry battalion”.

She also applauded the motivation of the unit and progress it is making insisting that “it is critical that the investment in this unit be properly maintained and utilized upon deployment, with clean supply chains and adequate supplies, a strong chain of command and missions and values that address Nigeria’s counter terrorism threat and keep civilians safe”, warning that “the reputation of Nigeria’s military is at stake”.

She said America is “eager to hear from you (Nigeria) about your plans for how civilians can better be protected throughout Nigeria” insisting that “those plans are critically important as you move forward towards your national elections next February”.

She also disclosed plans by the American government to “launch a major border security program under our Global Security Contingency Fund”, which will include Nigeria, Cameroon, Chad and Niger.