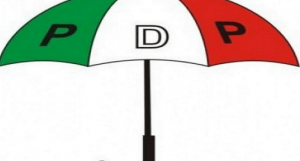 Delivering a short ruling, Justice Ahmed Mohammed struck out the suit on the ground that the plaintiff had filed a notice of discontinuance of the suit.

Jen, a governorship aspirant had, through his counsel, Mr Emmanuel Toro (SAN), urged the court to nullify the election which produced Ishaku for been conducted in Abuja, instead of Taraba State, in breach of the provisions of the Electoral Act.

He also prayed the court to order Ishaku to stop parading himself as Taraba PDP governorship candidate for the rescheduled April 11thgeneral elections, pending the determination of the suit.

Jen also urged the court to restrain the PDP and its National Chairman from forwarding Ishaku’s name to INEC as governorship candidate of PDP in the April 11 general elections.