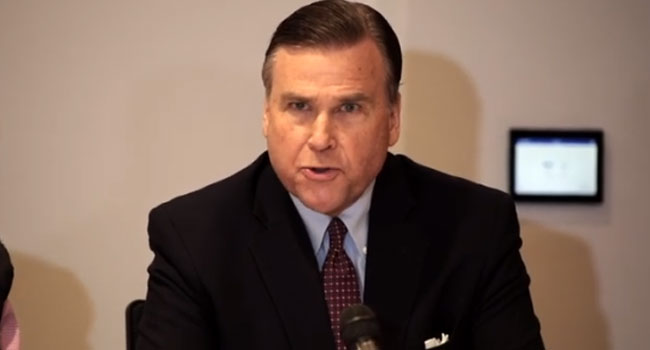 As in 2015 and in 2011 before it, the U.S. Mission supports a process and not a candidate in the upcoming races for the Nigerian presidency, state governorships, and state legislature seats in 2019.

Like those previous elections, the U.S. mission is rooting only for a free, fair, transparent, and above all peaceful electoral process.

“I hope with all my heart that every Nigerian who has a voter card, will use that voter card tomorrow and be part, not just of the vote but of the peace.” – Ambassador W. Stuart Symington https://t.co/L86ntM8O5e #WatchingTheVote #NigeriaDecides2019

Since 2014, $58.2 million portfolio of USAID activities – with $18.6 million co-funded by the British Department for International Development – is helping INEC institutionalize reforms to ensure credibility and accountability, assist CSOs in their critical function of oversight and mobilization of the electorate, and boost participation among marginalized groups such as women and persons with disabilities, and mitigate drivers of political violence.

USAID supports INEC’s administration of the elections process, political party formulation of issues-based campaigns, and building awareness among the electorate about their rights and roles in the democratic process as both participants and candidates.

“Peaceful and credible elections are critical to development in Nigeria,” Mission Director Stephen M. Haykin said. “Our elections support activities help provide a channel for Nigerians to choose leaders who will govern democratically and improve basic services for citizens. In that sense, our support to free and fair elections is as important as any of the work we do.”

For the election results to be fully embraced and accepted by the Nigerian people, INEC’s processes and outcomes must be seen as beyond reproach. To this end, USAID trains INEC electoral officers in election administration and operations, builds its capacity to coordinate security planning, develop effective dispute resolution mechanisms, and develop more inclusive voting access policies.

“All our work is about building the skills of local groups so they can be active participants in the governance of their own country,” said Aubrey McCutcheon, senior resident director of the National Democratic Institute, a longtime USAID elections partner.

“While the funding is foreign, the training strengthens the indigenous CSOs who are doing all the work in mobilizing Nigerians to ensure free and fair polls through their oversight.”

McCutcheon said the PVT framework allows citizens and organizations not affiliated with the government to independently validate the results announced by INEC, to verify the results as legitimate or not by taking statistical samples of polling units in every local government area around the country.

It also codifies comprehensive monitoring of everything from the set-up to the voting to the counting afterwards, reporting “parallel” results within a margin of error and irregularities such as intimidation and vote buying, which was a serious issue in September’s Osun State gubernatorial election.

Critical pre-election observation for early warning signs of violence provides reports to other civil society and security agencies to mitigate violence before it worsens.

Likewise, USAID has played a significant role in fostering political leaders by strengthening youth organizations to shape the national political atmosphere, according to Obinna Udenwa, 30, who helped shape a USAID-supported Youth Manifesto through the Youngstars Foundation, and now a candidate for office in Ebonyi State.

Through that manifesto came the idea of the Not Too Young to Run bill (see sidebar) which proposed reducing the age limit to stand for political office and was signed into law by President Muhammadu Buhari in May of 2018.

“But that is not enough,” Udenwa said of the new law. “The older generation of Nigerian leaders has no mentorship program that would enable young protégés get into positions of leadership. Youth must rise to this challenge and get involved.”

Historically, said McCutcheon, youth have served as pawns in Nigerian elections – recruited by politicians as hired agents for violence, who for small sums of money they would recruit to disrupt polling places, snatch ballot boxes, or worse.

To counter this trend, USAID supports a campaign to raise awareness and change attitudes and instil in youth the importance of being active –and peaceful– participants in the process. Since 2014, the Vote Not Fight: Election No Be War campaign has utilized popular culture to promote peace, including peace concerts staged by media star Innocent Idibia popularly known as “2Baba.”

As a longtime volunteer peace Campaign Ambassador, 2Baba has led voter registration drives and sponsors forums where candidates sign peace pledges and commit to action on campaign promises if elected.

The explosion of social media has played a great role in getting the youth of Nigeria more involved in the politics of their country as well as other social issues, USAID actively supports overarching media work under hashtags #VoteNotFight and #ElectionNoBeWar from state television to local media, advocating for peace and participation anchored by the profile 2Baba and his charitable Foundation brings to the campaign prescribing issues-based discourse as the antidote to election-day violence.

“2Baba’s work cuts a path for other CSOs,” says McCutcheon.

USAID supports the development of strong, inclusive political parties to strengthen their engagement with constituents and develop platform-based involvement with government processes, and helping major parties to become more representative of and responsive to citizens.

Not only do USAID activities help improve the frequency and intensity of interactions with their constituents, but also foster better communication among party officials, officeholders, candidates and rank and file members at all levels.

“We’re trying to connect citizens to governance to ensure citizens are active participants in the political process,” said Sentell Barnes, chief of party of the International Republican Institute in Nigeria, another longtime USAID partner in elections support.

“By making sure that political parties engage with their membership and also reach out to citizens to identify the issues so that once in power, we help ensure those issues are addressed in a meaningful way.”

At the end of the day, the U.S. government, through its USAID activities, wants to help Nigeria operate on the basic tenets of what democracy is, said Barnes. That consists of ensuring free and fair elections, that parties run their affairs without interference from government officials, and that INEC has the necessary resources to conduct free fair and transparent elections.

“I believe in the power of the people to elect their leaders,” said 2Baba. “I also believe the process of elections should be peaceful and civilized. Otherwise, we stand to lose a lot.”