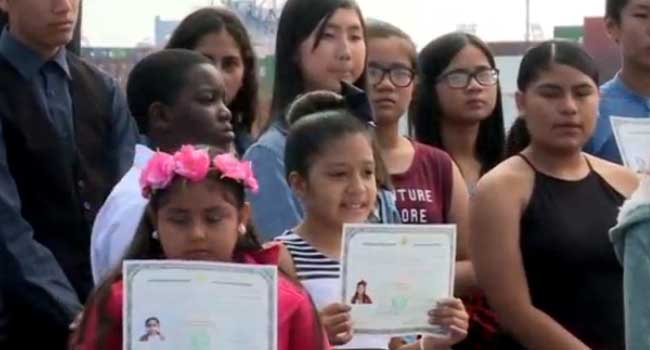 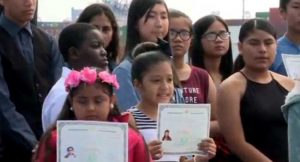 Forty-one children became citizens of the United States in Los Angeles on Monday.

The group ceremony, held aboard the USS Iowa battleship museum, brought together children from 14 countries between the ages of seven to 22.

The group took individual oaths before taking part in a group pledge. All the children have parents who have become naturalised citizens.

“I came from Mexico. Both my parents are from Mexico. They just came to give me a better future and I hope to be a good citizen after this and bring something to the country,” said 16-year old Frida Ibanez.

U.S. senator Kamala Harris was at the ceremony, greeting the new citizens.

Harris has been an outspoken advocate of immigration rights and has been vocal in her opposition of President Donald Trump’s immigration policies, including his travel ban and proposed border wall with Mexico. 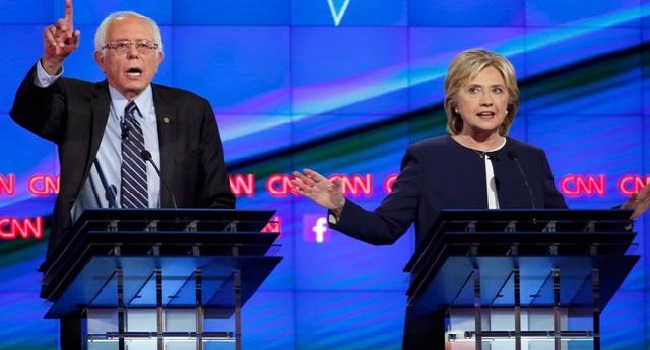 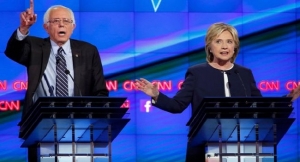 US democratic presidential contenders, Bernie Sanders and Hillary Clinton have clashed on gun control and healthcare in a live television debate.

Sanders pushed back painting Clinton as a defender of the status quo who accepted hundreds of thousands of dollars in speaking fees as a former secretary of state from Wall Street backers.

“I don’t take money from big banks. I don’t get personal speaking fees from Goldman Sachs,” the U.S. senator from Vermont said, adding, “I have huge doubts when people receive money from Wall Street.”

Clinton accused Sanders of voting to deregulate the financial market in 2000 in a way that led to the central causes of the financial collapse of 2008 that pitched the U.S. economy into a deep recession.

Clinton tried to undercut Sanders’ support among supporters of Obama, who remains a popular figure in the Democratic Party.

“Senator Sanders called him weak, disappointing, he even in 2011 publicly sought someone to run in a primary against President Obama.”

Before the debate in South Carolina, Mr Sanders unveiled a healthcare plan for all American citizens.

Towards healthcare, companies would pay an extra 6.2% of an employee’s income towards the plan.

The debate was held across the street from the Charleston church where a white gunman killed nine black worshippers in June, and Clinton made reference to the incident while accusing Sanders of being weak on gun control.

She welcomed his decision on Saturday night to back a bill in Congress rescinding portions of a law giving gunmakers immunity from lawsuits, but said his record showed a more lenient attitude toward the demands of the powerful National Rifle Association (NRA) gun lobby.

Sanders defended himself, saying he has a strong record on trying to prevent guns from getting into the wrong hands and standing up to the NRA.

While Hillary Clinton leads the polls nationwide, she is facing a threat from Vermont senator Bernie Sanders in key states.

Sanders cast himself as the outsider who would lead a political revolution, while Clinton touted her experience and embraced President Barack Obama’s legacy.

This was the final democratic debate before Iowa caucuses launch the nominating race on February 1.

The debate followed a week of rising tension between the two leading candidates.